Part three: What does the future look like for Van Cleef & Arpels’ iconic Alhambra collection? 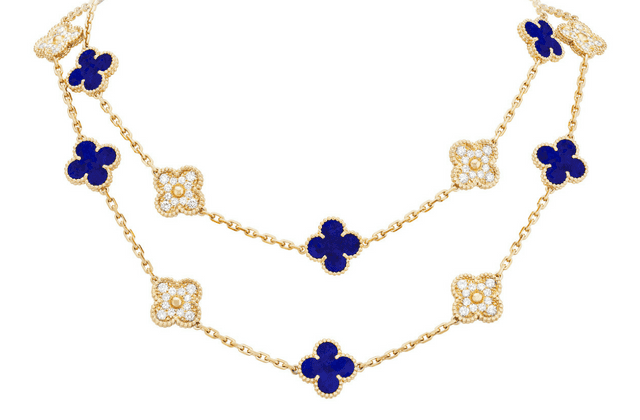 In the final piece of our three-part series with author Nicholas Foulkes on Van Cleef & Arpels' Alhambra collection, we explore what the future looks like for the motif by looking at its history...

This week we began our three-part series looking at the enduring icon that is Van Cleef & Arpels‘ Alhambra collection. Speaking with author Nicholas Foulkes (who researched and penned the definitive tome on the collection) during the brand’s dedicated one-day event in Marrakech, we delved into the creation of the book and what it reflected of the collection, as well as the legacy of the motif that has become a living legend. Here, in our final piece, we look at what the Alhambra collection means for the modern millennial consumer and how it will continue to resonate for the next 50 years…

What does Alhambra mean to a millennial consumer?

Every interview — well, not every. I shamelessly exaggerate all the time — I read with a CEO will say ‘We’re reaching out to millennials via Instagram and we’re getting good engagement.’ You hear all of this stuff, and I think, hold on, you’re not in the Instagram engagement business, you’re in the business that you’re in.

This is why I like Pierre-Alexis Dumas [the Artistic Director] at Hermès. He is a real person and he understands that basically at the end of the day you’re not marketing something through a communications channel but making something that will create an emotional response in somebody else. How crude or sophisticated that response is doesn’t really matter. The fact that you’re touching somebody’s soul or intellect or whatever it is…

It’s incredibly personal. So whilst the social media approach works for some industries…

Yes it works for some industries and I think it’s silly to pretend it doesn’t exist.

I think that for something like jewellery which is so personal and there’s so many emotions connected to it that you need to give people a reason to come in store and discover it. Which is why something like the Alhmabra book which you’ve put together gives people the heritage of it, they know exactly how it started, how it evolved and what it is now and I think more and more consumers are looking for that, millennial or otherwise…

We live in pretty impermanent times and I think certainly living in a big city like you do and I do… I’m probably the last generation of indigenous bourgeois Europeans that is going to be able to afford to live near the centre of the capital of my country. I’m the last. The rest will be the ruthless rich who will buy it up as an investment or a place to park money, whatever. So, you’re living in a deracinated world so I think the instinct is to have things about you that mean something to you and part of meaning is wrapped up in the past.

I don’t expect everybody to read [the book] but I hope that for those who do read it that they’ll come away with an increased appreciation of what it is that Van Cleef does. And obviously it’s quite nice to know how these things came about.

There’s a quality about [the pieces] that transcends ubiquity. These things gain power and resonance through reputation rather than being devalued by it.

And that then speaks to the fact that with jewellery, more often than not, people will think about what they’re purchasing because it’s an investment piece.

Yeah and you want to know what it is you’re buying. And the great thing is that you buy [an Alhambra piece] now, if the past 50 years is anything to go by, you’ll be able to wear it in 10 years time. Whereas a lot of things you can’t be sure about, they’re not timeless.

The Alhambra collection sits outside of that cyclical scope.

Well it sits outside it and yet dips into it when it wants to. It’s perpetually relevant and topical at all times. I mean don’t get me wrong, it’s not the wonder drug but it’s a pretty unique creation. It’s something like the Birkin bag or a Rolex, something that is now never wrong.

Branding has become abstract, logos have become abstract as to what it is, it used to be that somebody had made something that they thought enough of it to be able to sign it, like an artist. It was a guarantee of quality of sorts. Now it’s become this abstract, Pavlovian thing where people see a logo and feel the need to buy it.

You know its Van Cleef but its cultural identity is inseparable from its physical form.

Yes people will always want it. It’s a three generational thing now — you have people who wore it in the ’60s who were in their ’50s then and are sadly no longer with us but now their grandchildren are wearing it.

There’s the possibility of these pieces becoming heirloom pieces.

It’s nice because these things are kind of vessels for emotional memory. You write your own story with it because it means something to you. We are essentially superstitious beings with luck, memory and emotion and being reminded of things — we are emotional creatures and this is something that taps into that. It’s very intimate, it’s been worn next to the skin of someone who may no longer be with us or someone like Grace Kelly or someone you really admire and they were not in the modern world, were not brand ambassadors, but they were people who liked it and wore it because they liked it.

You’ve looked at the past of Alhambra and we’re here to celebrate its present —how do you see the future of Alhambra?

If I knew that I would have probably made all sorts of clever investments and retired by now [smiles]. I’m in no position to tell you at all but my guess is that it is a part of our cultural furniture and as long as they continue to respect it, which I have no reason to believe they won’t, it will continue and it will flourish and grow. There’s a quality about [the pieces] that transcends ubiquity. An analogy that I like is that its like Warhol’s pop art — these things gain power and resonance through reputation rather than being devalued by it.