Dior kicks off Cruise ’21 season with spectacle in Italy 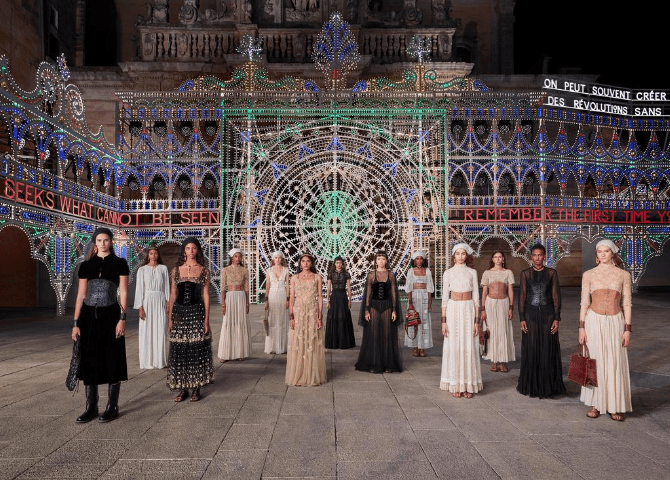 Held in the center of Lecce, Dior's Maria Grazia Chiuri paid homage to the Puglia region with an exquisite Cruise '21 collection...

Whilst fashion houses around the world are opting for digital experiences to showcase their latest collections, Maria Grazia Chiuri decided to launch the first physical show of the season — right in the city of Lecce, Italy’s baroque capital.

As with any other of Dior‘s shows, the backdrop remained exquisite as Chiuri’s latest Cruise ’21 creations took center stage against dazzling illuminated architectures at the Piazza del Duomo. It was a true celebration of Puglia’s craftsmanship and traditional practices (the southern Italian region holds a special place in Chiuri’s heart), as the show space paid homage to the region through dance, music and of course, sartorially.

The clothes marked a celebration to the artisans and artists as a poetic marriage between tradition and modernity echoed through fringed skirts, headscarves and embroidered dresses. We spotted Dior’s signature Bar jacket reimagined with a looser hourglass waistline, and a new take on suits with short-and-jacket combos (the perfect way to do a summer suit) and elegant tulle dresses.

Fabrications played an important role in this collection as geometric patterned fabrics traditionally used for the home were transformed into dresses. There was also 3-D floral embroidery, raffia-embroidered wheat sheaves, black crochet and a slew of ancient weaving techniques (in collaboration with two local organizations: Tessitura Calabrese and Le Costantine Foundation).

The show space was just as impressive as the collection. Below, take a closer look at the construction of the Cruise ’21 backdrop. It reportedly took 12 days to assemble, the traditional luminarie weigh a total of 60 tons and feature 30,000 coloured LED bulbs, while the catwalk takes 2.25 minutes to walk.

Now, find out where you can get your hands on Dior’s new Bobby bag.