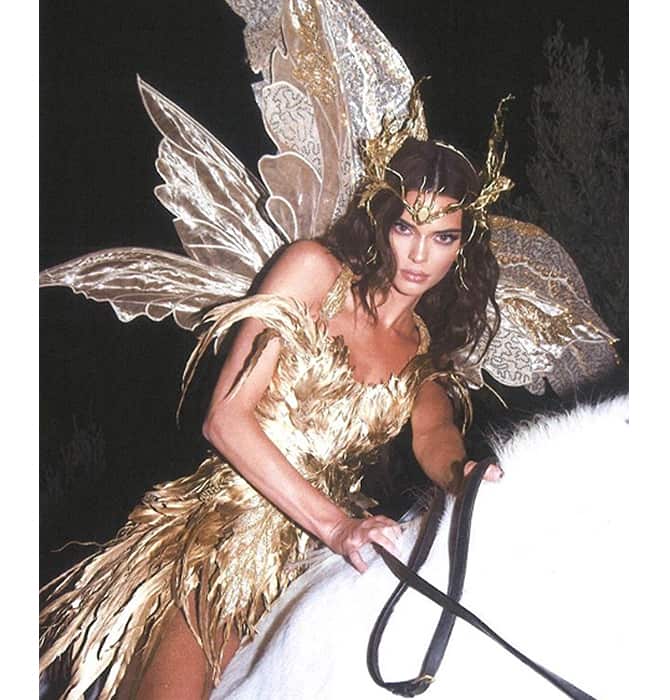 How do you ring in your 24th? Well, if you’re Kendall Jenner and your birthday just so happens to fall right after Halloween (November 3rd, to be exact), you go for a 2-in-1 combo and celebrate both with a star-stacked, hugely Instagrammable fête, of course.

The Karjenner model hosted a lavish costume party in West Hollywood’s Blind Dragon inviting (naturally) every single celebrity imaginable, from the Hadid sisters Bella and Gigi (who showed up as Cat Woman and The Mask) to Hailey Bieber, and several Kardashian sisters, to name a few. But it was Kendall’s golden forest fairy getup that stole the night.

The birthday girl showed up in an all-gold forest fairy outfit by up and coming Kuwaiti designer Yousef Al Jasmi, which celebrity stylist and friend Marni Senofonte topped off with a dreamy pair of champagne wings and matching gold antler crown. The Keeping Up with the Kardashians star even showed off pointed, elf-like ears that truly brought her fairy costume to life.

Yousef, who opened his first boutique in Kuwait in 2008, rose to fame when he dressed Beyoncé in a Swarovski-detailed black bodysuit for her music video “Sorry.” Since then, he’s dressed Lady Gaga, J.Lo, Taylor Swift, Sharon Stone and many more A-list celebrities.

What was the best part of the party? Was Kendall’s impromptu photo op where, posing on the back of a white horse, she gave out Bianca Jagger-like feels circa her Studio 54 horse entrance moment. Another, fun setting were the party staff who were clad in exact replicas of Kendall’s feathery orange Met Gala gown.

Other guests at Kendall’s party included Emily Ratajowski and husband Sebastian Bear-Mcclard, who channeled Tony and Carmela Soprano. The duo enjoyed some photo booth fun with The Weeknd, who was unrecognisable in his Jack Nicholson-era Joker costume.

Many of the Keeping Up with the Kardashians stars’ took to Instagram to document the late-night bash on social media, including younger sister Kylie Jenner, who donned an elf-like hybrid costume and Kourtney Kardashian, who channeled country superstar Dolly Parton.