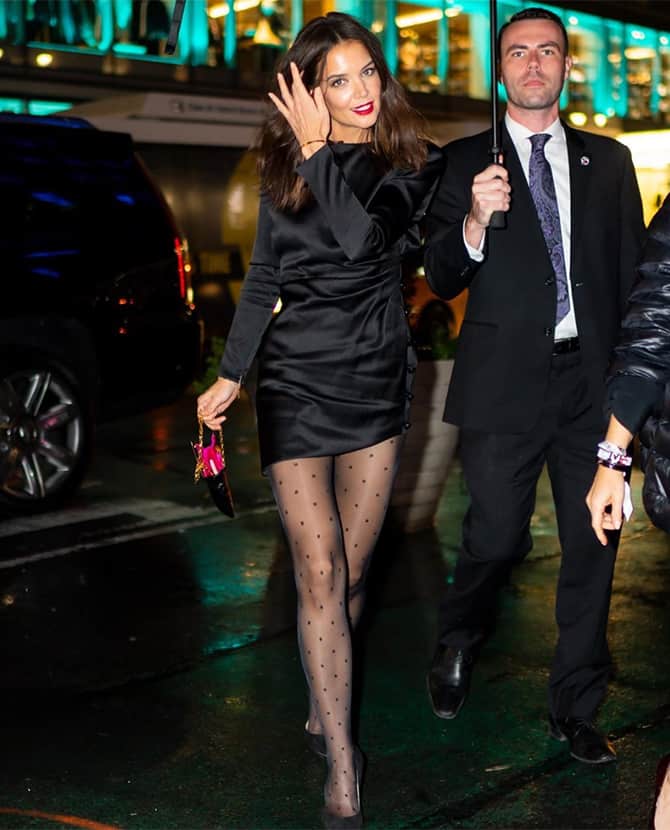 Why everyone is obsessing over her new post-breakup style…

We loved her way back when she played simple and sweet Joey Potter, the teenage ingenue that stole the hearts of many on Dawson‘s Creek, and the one whose all-American style slowly snuck its way off the camera and into Katie’s off-duty wardrobe making her Midwestern girl-next-door uniform of jeans, slip-dresses, and tank tops the go-to for many a woman during the ’90s.

Following a tumultuous divorce in 2012 from Tom Cruise, the actress went quiet and so did her prowess on the fashion scene – a style hiatus that continued straight throughout her relationship with Jamie Foxx, the man who she had been quietly dating for over six years.

But now, newly single, Katie has finally emerged from hibernation and everyone’s fawning over — what most are calling — fall’s most fabulous fashion star.

Yes, we know breakups usually mean being low-key, but somewhere along the way, Katie’s post-Jamie appearances have been anything but, making her current style more newsworthy than the actual demise of her relationship.

And it all started when she stepped out in New York in a Khaite cashmere bra and barely-buttoned cardigan look that went viral in September, and that, according to a Khaite representative, within one hour of the brand sharing a photo of the barely buttoned, yet utterly chic look on Instagram, they had completely sold out of all their inventory.

Since then she’s been living it, delivering some of the hottest post-breakup style we’ve seen in years; from casual cool in bright Gucci logo tees to looking effortlessly chic and monochromatic in head-to-toe Gabriela Hearst, and then slaying it in her latest look – an utterly divine long-sleeved LBD courtesy of Saint Laurent by Anthony Vaccarello. Katie’s back and she’s definitely got the outfits to prove it!

Now, find out which Jennifer Lopez look just shut down the red carpet.