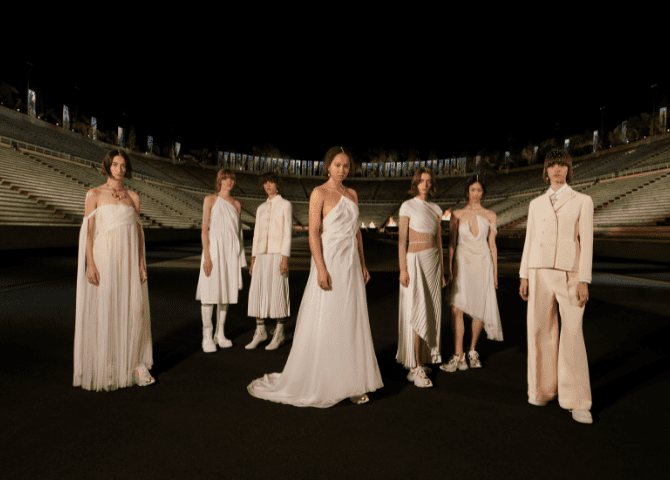 Held at the ancient Panathenaic Stadium in Athens, here's everything you need to know...

Around 330 BC, Ancient Greeks took to the Panathenaic Stadium in Athens, pioneering athletics as we know them. Yesterday, in the very same spot, Dior Cruise encapsulated themes of athletics, freedom, and femininity in their first runway show since the beginning of the pandemic. Here’s three key takeaways to know about the ethereal collection, from the fireworks display to key design inspiration…

Maria Grazia Chiuri, Dior’s Creative Director, remixed staples of historical Greek aesthetics in the collection, after garnering inspiration from archaeological sites and via the study of female divinities:“…our research was really big in terms of the history of Greece,” she told Vogue. “We worked to show how important this time was, not least for the 20th century.” And so, 91 divine pieces were born, in the form of billowing white toga dresses (styled with Nike trainers);functional and feminine sportswear; exquisite suiting. An ode to Greek history, while staying loyal to Dior’s key sartorial codes.

Chiuri was cautious about the grandeur of the setting, concerned that the location would “become too theatrical.” Still, the location was pretty awe-inducing, featuring a 1,650-foot-long runway, the scene romanticised even further by the soundscape of Greek singer Ionanna Gika and a 55-piece orchestra. To top it off, fireworks burst as Dior marked their return to the runway.

From Anna Taylor-Joy and Cara Delevingne to Suki Waterhouse to Greek President Katerina Sakellaropoulou, there were plenty of big names amongst the audience to witness the collection first hand.