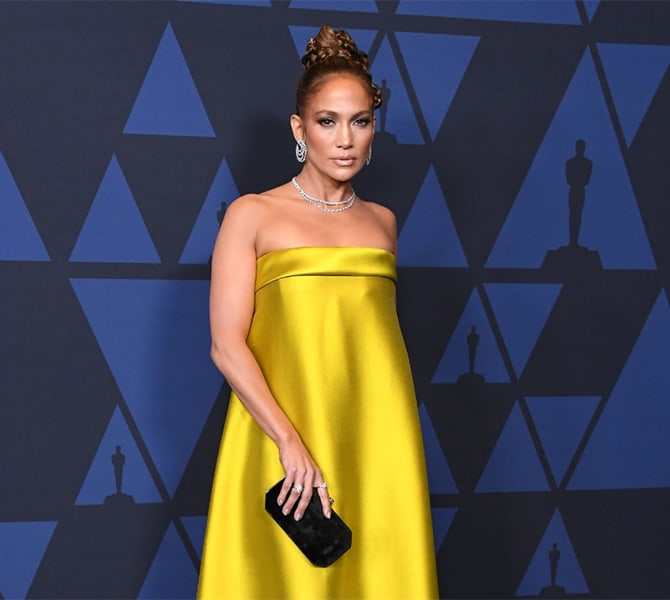 There’s a new gold standard for red carpet glamour and J.Lo set it at The Governors Awards…

It’s safe to say that 2019 has certainly been J.Lo’s year for slaying the red carpet. Her last appearance, the Versace S/S2020 show, saw her literally break the internet appearing on the milanese runway in the plunging, jungle-printed dress she wore to the Grammys back in 2000.

Yes, who can forget the legendary Versace number that caused so many searches on Google that the company created Google Image search right after.

Today, the 50-year-old is still riding high as her red carpet appearances bang out one best dressed look after the other. Case in point the 11th annual Governors Awards, where J.Lobrought her timeless glow in regal yellow gown with sculptural back bow by designer Reem Acra.

The star, who took a break from shooting her next movie Marry Me, paired the strapless column dress with a black Tyler Ellis clutch, glistening Harry Winston diamond earrings and matching necklace, as well asa braided updo and golden makeup.

This is not the first time that J.Lo has turned to the Lebanese designer for a red carpet event. The star wore a sleek black embellished Reem Acra number back in 2017 to accept her award for Favourite Crime Drama TV Actress at the People’s Choice Awards. She also donned a risqué blush wrap-around dress by the designer to the 2014 American Music Awardsthat turned heads.

Reem, who launched her brand in 1997, is known for her breathtaking gowns and eponymous bridal line,and has dressed some of Hollywood’s most famous women, including Taylor Swift, Kate Hudson and Angelina Jolie.