Introducing you to the 'Heritage Collection'...
July 3, 2019
Meeran Mekkaoui 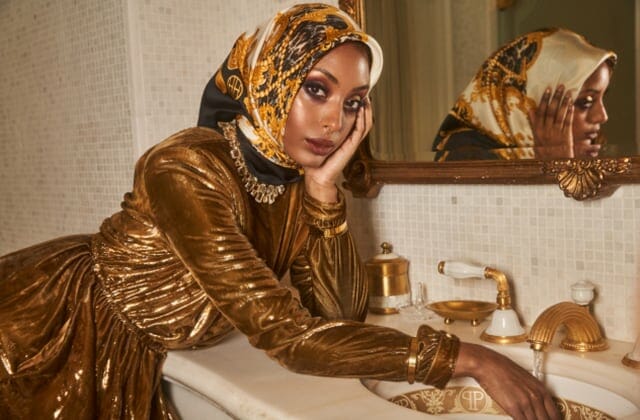 It's been ten years since Haute Hijab actually became a thing and this is how they're celebrating their anniversary...

In the early days of Haute Hijab (nearly ten years ago), Co-Founder and CEO Melanie Elturk spent her days hitting up vintage stores, looking for hidden gems that would eventually lead to quality hijabs. After experiencing the common struggle to find something other than just a single-toned cotton piece, Elturk then strived to design hijabs that were inspired by elements of the Islamic tradition but as well, were fashionable.

Now, Haute Hijab is celebrating its 10th anniversary and to celebrate, the US-based brand have infused its vintage legacy with Islamic art elements to create the Heritage Collection — with each piece designed to celebrate the Muslim woman and confidently owning her heritage as she strides boldly into the future.

Speaking of the new launch, Elturk took the announcement to Instagram and said: “Ten years in the making, we’re proud to unveil our Heritage Collection to the world. I’ll never forget my first vintage scarf. Ivory, satin and covered in gold chains, it was so different from the two cotton, triangle hijabs I had been wearing for years. My new hijab instantly filled me with a deep feeling of possibility.”

Elturk then continued and said: “Nearly ten years later, I launched Haute Hijab the best way I knew how — with vintage scarves. Even in those early days, they flew off the shelves — there were so many women just like me who wanted something different. As we grew over the years and continued to perfect our everyday options, I always remembered the feeling of inspiration and power that so affected me as a 15 year-old girl. And so, while we hand-crafted our Luxury Collection and reimagined Underscarves, there was one collection I couldn’t wait for us to tackle: silk prints inspired by our vintage legacy — but this time, made as hijabs for us.”

If you want to get your hands on some of the pieces from Haute Hijab’s new Heritage Collection, just head to HauteHijab.com.

Now, take a look at the Middle Eastern designers that stole the spotlight at Paris Haute Couture Fashion Week.