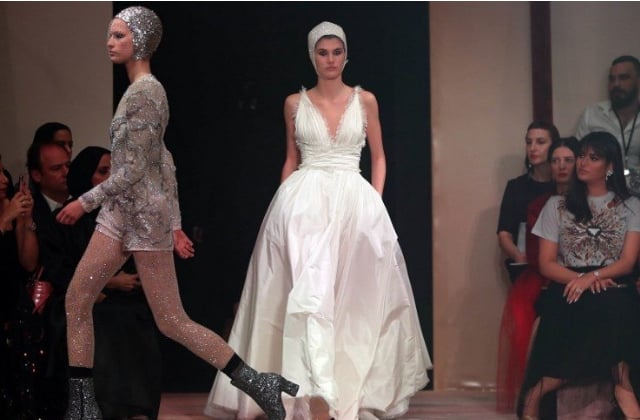 It’s safe to say that Dior’s Haute Couture S/S’19 show in Dubai was the most anticipated events on the calendar. And we can confirm it was everything – and more…

Dior came to Dubai last night to showcase its Haute Couture S/S’19 collection for the first time ever. And it was kind of a *massive* deal.

In the middle of Dubai’s Safa Park, there was a huge tent erected emblazoned with ‘Dior’ across it and a string of twinkling lights hanging off it. Everyone who’s everyone in Dubai’s fash pack came in their droves clad in appropriately theatrical ensembles – tulle, rainbow colours, winged shoulders, circus-inspired organza and oversized accessories – surrounded by fire-breathers and circus performers.

We first saw the collection in January during Haute Couture week, so we kind of knew what to expect – knowing the circus theme inside out at this point – but nothing quite prepares you for the real-life experience.

As we sat down waiting for the show to begin, the space was abuzz with palpable energy while the glow of everyone’s phone lit up the already ambiently-lit  venue. The lights shot up and the show began. The original looks from the show in January were presented in full force but Maria Grazia Chiuri also created 15 special looks, nodding to the host city of Dubai, which included knife-pleat metallic gowns and a colourful, ruffled polka dot skirt with a tiered, trailing cape that closed the show. In a rousing end to the show, the back of the tent opened up to a bang of confetti, where the party kicked off with members of the circus performed dizzying balancing acts between sacchrine sweet displays. It was a complete and delicious sensory overload.

The entire collection spoke to the woman of today, honouring feminist sensibilities, strength and sisterhood.

Speaking to AFP, Chiuri said, “When you think about Dubai, you think of a place that in a sense is very Mediterranean, where there is the sun. So we use more colour, different techniques, different shapes.”

Now, check out the S/S’19 trends according to Harvey Nichols – Dubai.