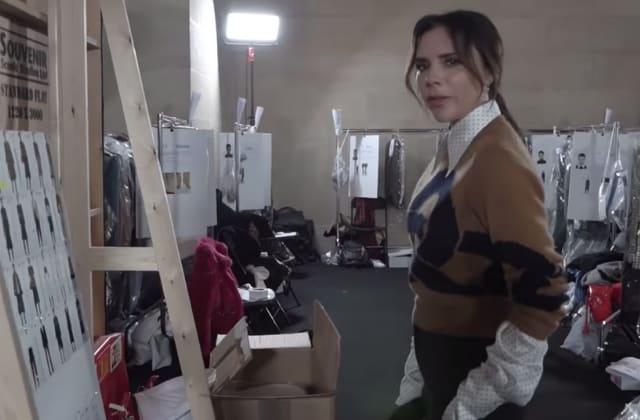 In the next instalment of Victoria Beckham's revamped YouTube channel, we see how her F/W'19 show goes down on the day. And it just goes to prove how much hard work she puts into her work. Not that we were doubting her efforts...

Victoria Beckham‘s freshly updated YouTube channel is like a Netflix binge – but the fashion version – with the last few episodes dedicated to the behind-the-scenes of how her F/W’19 show was put together. The first two episodes set the scene at her HQ establishing that the whole presentation needed to be come together in a whistle-stop 48 hours.

And now, the third episode was uploaded a few hours ago, titled: The A/W’19 Fashion Show. In other words: it’s game time.

Starting off at ridiculous o’clock, VB and her team go through last minute changes, orchestrating the models, the clothes, the lighting and the music at the Tate Britain where her show was held. VB is hands-on with every aspect of the show, making sure all is according to plan, despite having a fleet of people around her.

In the episode too, is a cameo from her brood with Brooklyn Beckham wishing his mum good luck on camera, “I know you’ll do well like always, I love you so much, I can’t wait to see the new collection,” he said.

We didn’t need this episode to prove VB’s strong work ethic but it definitely confirmed she is wholeheartedly committed to her craft. Thierry Dreyfus, a lighting designer who has been in the fashion industry for 35 years, worked on VB’s show saying that he’s got the utmost respect for her.

After the show ended she was met with heaps of compliments from the press and friends, including IT-girl Olivia Palermo, followed by an after party which featured some girl power music – yep, VB danced to a Spice Girl track and it literally made our morning just now.

Now, read up on the lovely things George Clooney said about Meghan Markle.