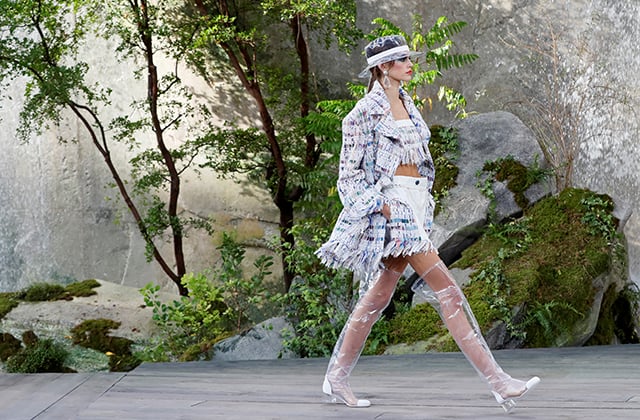 Today it was announced that Kaia Gerber would design a special capsule collection for Karl Lagerfeld. Here's what we know...

It’s already evident that Kaia Gerber is on the same trajectory as her supermodel mother Cindy Crawford. The 16-year old made her runway debut at New York Fashion Week for the Spring/Summer ’18 season and has quickly gained immense success since then.

Shortly after she walked the Versace runway show (which saw an iconic finale delivered by Cindy, Carla Bruni, Claudia Schiffer, Naomi Campbell and Helena Christensen), Kaia was named as the newest face of Omega, following in her mother’s footsteps who has been the longest-serving brand ambassador for the Swiss watchmaker.

Now, the breakout star has created her own path and can add designer to her list of growing accolades.

Karl Lagerfeld has tapped Kaia to create a capsule collection for his eponymous label. Blending Karl’s iconic Parisian-chic aesthetic and Kaia’s all-American style, the Karl Lagerfeld x Kaia collection is set to feature a selection of ready-to-wear, footwear and accessories.

Chief Executive Officer of Karl Lagerfeld, Pier Paolo Righi, told WWD: “When Karl first told us his idea to collaborate with Kaia, we were all excited by the incredible potential and power of bringing their two worlds together. We have been working intensely over the last months with Kaia in LA and at our studio in Paris. It was exciting to see her clear vision, passion and engagement, and the collection will definitely inspire many young women.”

This pairing comes as no surprise as the designer chose Kaia to open the Chanel S/S’18 show in Paris in October and to walk in the brand’s Metiers d’Art show in December.

Whilst no further details have been revealed about the upcoming collection, be sure to watch this space for updates. In the meantime, take a look at Kaia and Presley Gerber’s new Calvin Klein campaign.