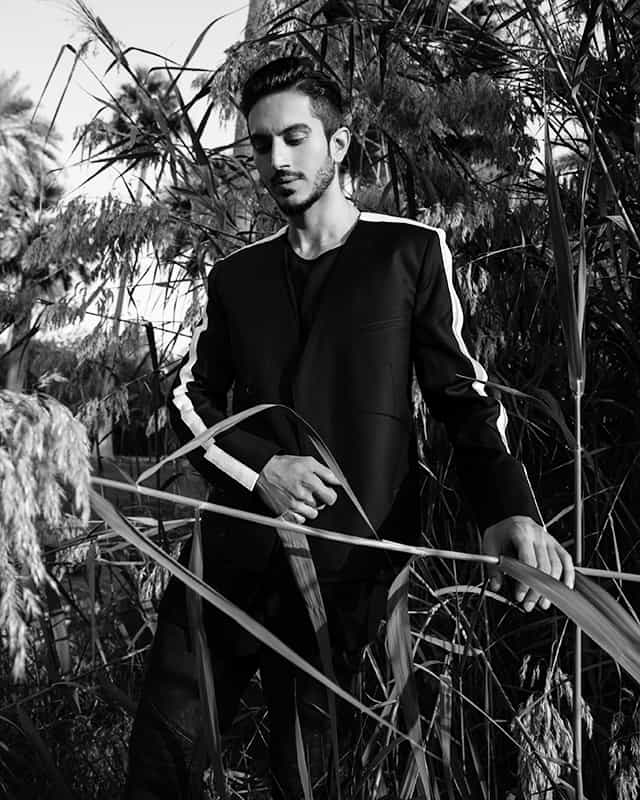 Ahead of his new seasonal launch, Hindamme's Mohammed Khoja speaks exclusively to Buro 24/7 Middle East to discuss the collection, the region and to share some fashion advice...

middle Eastern designers are ruling the fashion industry at the moment and for one Saudi Arabian designer, in particular, the success of his label Hindamme come in just under two years. Mohammed Khoja has celebrated two seasons following the brand’s launch in April 2016 and now, Season III is in the works and will be available to the public next month.

Ahead of the launch, Khoja exclusively spoke to Buro 24/7 Middle East to share his inspirations behind the new collection, the brand’s signature ‘East meets West’ concept, dressing Princess Deena and the future of fashion and art in Saudi Arabia. Have a read here…

What was the inspiration behind your third season?

There were several areas of inspiration with Season III. I looked at the Arab golden age, astrology, astronomy, mysticism and the work of early mystic poets. The collection is very much inspired by the universe and its role in our daily lives and in the lives of early Arabs.

When mood-boarding the collection, I looked at early Moorish astrolabes, the works of Mystic poets such as Rumi as well as the early conceptual works of Elsa Schiaparelli. My nylon gold embroidered zodiac pieces, for example, were heavily inspired by Schiaparelli’s Zodiac collection presented in 1938. I also deconstructed elements from the Azilal tribal patterns from the Azilal region of Morocco and repositioned them in a way that resembled the solar system on jackets and tops. The result is an edgy and cosmic blend of East meet West.

How does this new collection differ from previous collections?

I feel it’s a lot more innovative in terms of its interpretation of clashing both street and luxury, it’s more demanding and bold yet is still very much versatile and wearable. It’s very important for me to be able to blend all these elements and to create statement pieces that are easily wearable and versatile enough to be dressed up or dressed down.

I also expanded the line this season by introducing specifically womenswear and menswear pieces. For women there is an asymmetrical lace and sequin skirt with zippers, an oversized lace and sequin top, a black metallic cutout asymmetrical top and skirt; and for men there is a very sleek black wrap long sleeve shirt, a tribal button-up shirt and tuxedo style jeans with a velvet paneling. This season also includes its signature streetwear-influenced, unisex key staples such as various types of tops and bomber jackets. 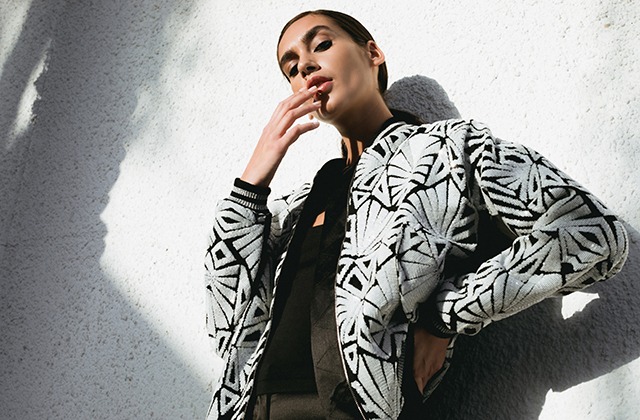 One of your brand’s core philosophies is the ‘East meets West’ concept and your pieces perfectly blend traditional elements yet they are still modern. How did you decide that you wanted to start your own label and bring this aesthetic to a wider audience?

I feel I have somewhat of a role as a designer from the region to honestly express my identity and experiences through my design aesthetic.

There is also so much beauty in the heritage of this region that I feel is often overlooked and I’d like to highlight these elements and to present them to a more modern generation as well as to also reverse the tables in a sense and inspire the more established Western fashion industry to look towards the region for inspiration.

I BELIEVE my ‘east meets west’ concept is so relevant and reflective of so many people’s experiences regardless of their background. it’s extremely important to me that my pieces are universal and can appeal and be worn by clients from various parts of the world as well.

You once described Princess Deena as your ultimate muse and dressed her for Paris Fashion Week, too. Who else, whether from the Middle East or not, would you like to dress next?

Princess Deena is truly the quintessential representation of East meets West and it was the ultimate pleasure to be able to dress her. She is able to portray a very surrealist feel in her personal style which is very inspiring and I also feel her persona and confidence are the main reasons as to why she can pull anything off.

I’d love to be able to dress Kanye West. I feel he’s been a very forward-thinking innovator when it comes to music and fashion yet he still appeals to a very mass audience, it would be very interesting to see how he would interpret Hindamme into his own style.

The fashion industry in the Middle East is very specific and has a very strong identity. Why do you think your collections resonate so well in the region?

My Middle Eastern client is definitely very specific and meticulous when it comes to detailing and the region is home to the biggest consumers of luxury retail. I also feel that Middle Eastern clients tend to want to stand out from the crowd rather than blend in and normally go for more of the statement pieces in a collection.

There is also a massive growing appreciation for streetwear in the region with the rise of events such as Sole DXB and local collaborations from major brands like Nike. I feel Hindamme resonates well because it combines both these worlds, creating streetwear-inspired luxury pieces that stand out. But the main reason I feel it resonates so well is due to my inclusion of Middle Eastern culture and heritage in a more contemporary format. 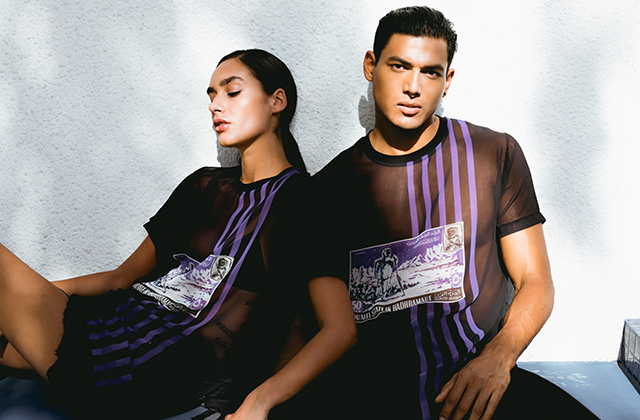 There are a lot of positive changes happening in Saudi Arabia at the moment. Where do you see the fashion and art industries in the future?

I am very excited about the direction of Saudi Arabia and all the positive changes happening at the moment, and although the art scene is quite established and respected in the Kingdom, fashion is still very much at an elementary stage. But with the multiple initiatives that are currently being developed within this industry, I envision a future where Saudi fashion will become the main industry that has potential to attract even an international market, and I feel this can only be achieved if we are genuine in establishing our own aesthetic.

Always dress for what you’re feeling, fashion should be something expressive. And I would also add, to know what colours and silhouettes work with your complexion and body type.

What else is coming up for you/the brand this year?

I am currently planning to host an exhibition at an art gallery in Jeddah to introduce the collection as well as doing a showroom in Le Marais in Paris later this year. As I was very moved by the recent decision to allow women to drive in Saudi Arabia, I am also releasing a small capsule collection of collectable jackets that commemorate the date in which the lift on the ban takes effect. Currently, I am also in talks for two projects, one to expand my design focus and apply some of my patterns to create furniture and design objects and another is with a major sportswear brand that I will hopefully collaborate with! 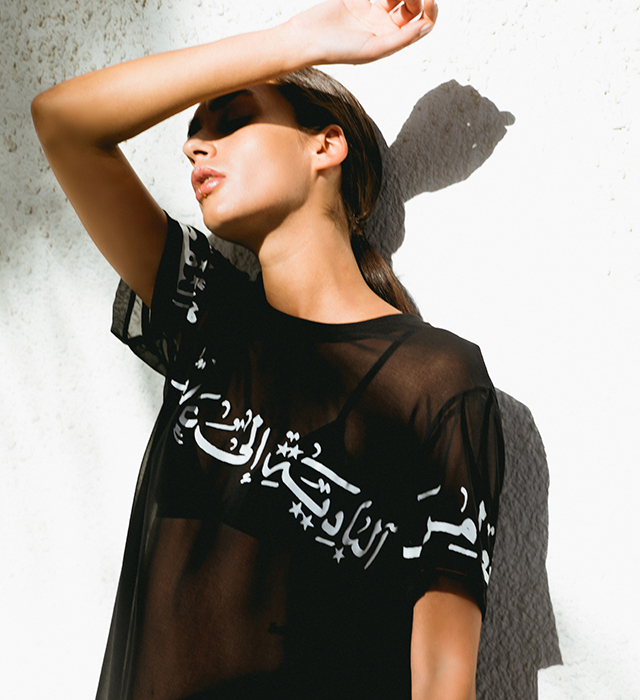 The Hindamme Season III collection will be available in two weeks on Hindamme’s e-shop Hindamme.com.