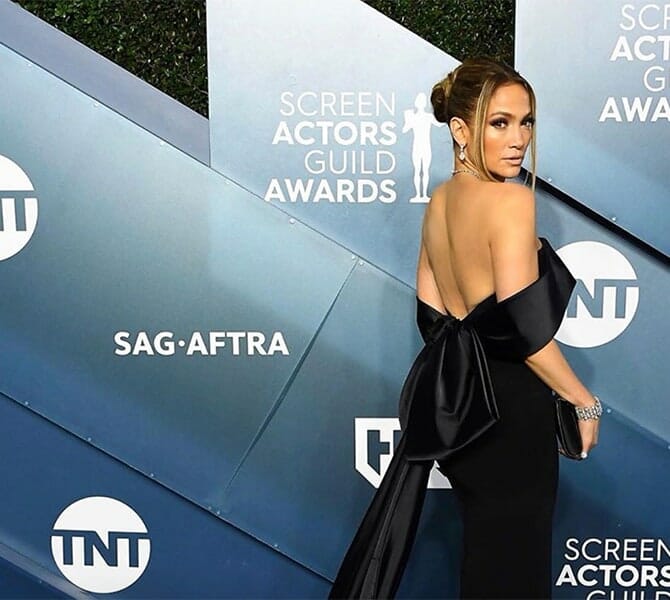 The 'Hustlers' star chose to wear Georges Hobeika, again, for her big night…

When it comes to Jennifer Lopez and her red carpet A-game, one thing is for sure, there is no shortage of glamour. Arguably one of the best dressed women this awards season round, J.Lo has managed to bring it, and the bring it big, to three of Hollywood’s biggest events, turning to one of the region’s finest designers for two of her showstopping entrances.

Yes, Lebanese wunderboy Georges Hobeika has found his biggest fan in the multi-hyphenate star, who chose the designer for yet another night of glamour shortly after dazzling in a backless champagne creation by the Hobeika for the Critics’ Choice Awards 2020 red carpet.

The Hustlers star channeled Old Hollywood for her last appearance as a nominee this awards season stepping out onto the red carpet at the Screen Actors Guild Awards in a black off-the-shoulder gown by the Lebanese designer, which opened into a trailing cape complete with oversized bow in tow. She brightened up the look with a jaw-dropping $9 million dollars’ worth of jewellery from Harry Winston, including a breathtakingly beautiful diamond necklace, to punctuate her final moment.

Jennifer, who was nominated at the SAGS for Outstanding Performance by a Female Actor in a Supporting Role for her work in Hustlers, shared her excitement last month with fans posting on her Instagram, “Holding back tears… means so much to me to be recognised by my fellow actors!!! Thank you so much to @sagawards for this nomination, it truly means the world to me!!! NEVER GIVE UP!! #HustlersMovie #Ramona #SAGAwards”

Now, see who won at the 2020 Screen Actors Guild Awards.