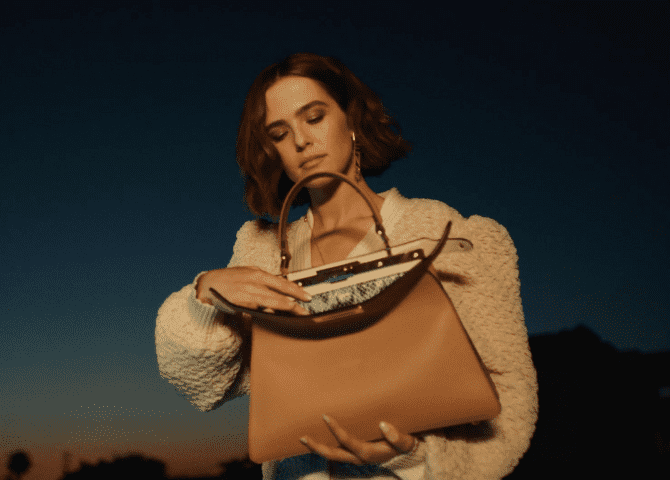 Fendi launches its first ever worldwide video and image campaign to honour the iconic bag...

You may have seen Zoey Deutch on the cult classic Princess Bride or regularly appearing on the Netflix series The Politician, but the American actress has long been perfecting her sartorial choices and has already cemented herself as a style icon amongst millennials. So much so that Fendi has tapped her to star in its first ever worldwide campaign for its iconic Peekaboo handbag.

The campaign is a celebration of Deutch’s authentic self as it highlights the emotional relationship between the radiant star and the new Peekaboo. Revealing the elements of the latest arm candy, Deutch is photographed on her journey to the studio, engaging with the perfect everyday bag along the way.

The iconic Peekaboo received an update for 2020 (which couldn’t have been a better time as this year marks its 12th anniversary) and the new design features an entirely new shape — think an accordion-shaped frame that opens in a deep smile, which we simply can’t help doing when we see it.

Adorned with inside pockets that can be interchangeable in smooth leathers or precious skins, the maison’s latest version embodies versatility, timelessness and the savoir-faire we’ve all come to respect from the brand.

In an exclusive video shared with Buro. Middle East, watch Deutch be her most authentic self in the new Peekaboo campaign, featuring the track ‘I See You’ by The Horrors.

The new Peekaboo bag will hit stores from late August.

Now, find out which Fendi Icons never go out of style.