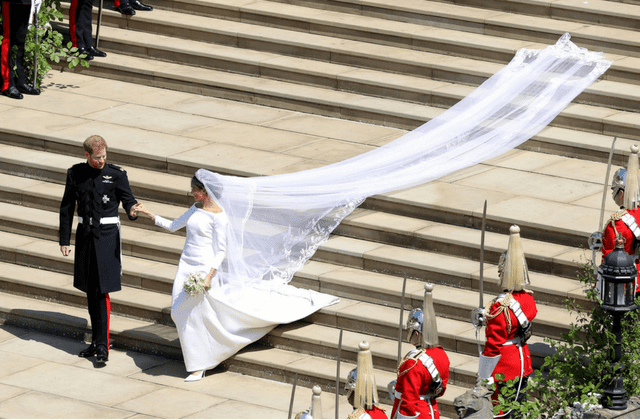 Meghan Markle's wedding dress has been a topic of conversation since it was unveiled at the royal wedding and one designer wasn't particularly thrilled about it...

The Duchess of Cambridge and The Duchess of Sussex have a few things in common: they both married into the British royal family and both have worn pieces by Emilia Wickstead on official royal outings. The British designer is a favourite of Kate Middleton’s with the Duchess having worn her pieces on several occasions, and Meghan recently wore a two piece suit by the designer for her first ANZAC day church service.

However, the designer wasn’t thrilled with Meghan’s wedding dress design, claiming the Clare Waight Keller piece was a knockoff of one of her own designs. Speaking to the Daily Mail, the designer said, “Her dress is identical to one of our dresses. Apparently a lot of commentators were saying, ‘It’s an Emilia Wickstead dress.'” She then added, “If you choose a simple design the fit should be perfect. Her wedding dress was quite loose.”

The brand posted an image of the design Wickstead is referring to on its Instagram last week also (complete with a photo of Harry and Meghan on the day) adding further fuel to the fire.

And it didn’t stop there, with the designer also sharing her thoughts on the bride’s hairstyle on the day saying, “I was like, ‘Hold the wisps [of her hair] back — it’s a royal wedding!”

For someone who has worked so closely with the royal family in recent years to make such a public statement of this nature is an interesting move from the designer. Only time will tell if the royal relationship will end as a result.

In the meantime, see Meghan’s official Coat of Arms which was unveiled this weekend.