Looks like we're in for something incredible...
December 28, 2018
Meeran Mekkaoui 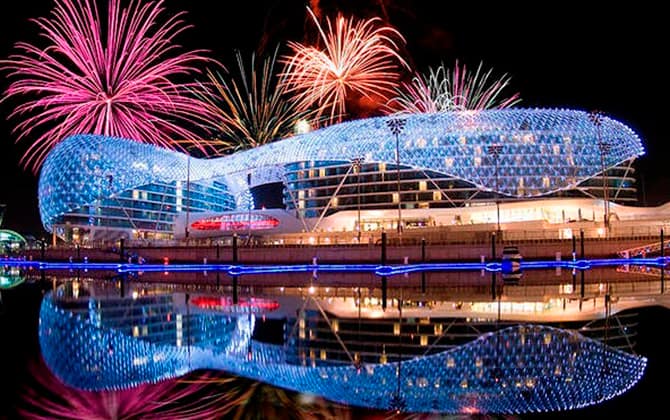 New Year's Eve is right around the corner, and it has just been revealed that Abu Dhabi will stage the world's largest firework display...

It seems that the UAE will be hosting a slew of spectacular firework displays for New Year’s Eve.

Following Burj Khalifa’s decision to replace its annual New Year’s Eve fireworks display with a record-breaking light show last year, the fireworks are coming back this year due to popular demand.

Plus, the country’s capital is serving up something special as it was just announced that Abu Dhabi is set to break the world record for the largest firework display.

According to the Department of Culture and Tourism Abu Dhabi (DCT Abu Dhabi), the capital will try to break the current Guinness World Record for the largest sentence ever created in fireworks this year. How so? There will be a 10-minute fireworks show on the Abu Dhabi Corniche that will spell out “Happy New Year 2019”.

The way it works is that the fireworks will be using iron “sky towers” to create letters at 40 metres in a range of different colours.

There will also be other major firework displays at Emirates Palace, Yas Marina and Al Maryah Island.

As for now, we’ll just have to wait and see if it actually works! Not long left now…

Now, take a look at this new luxury eco-friendly hotel that just opened its doors in the UAE capital.