Drop everything: The first look at Stranger Things season three is here 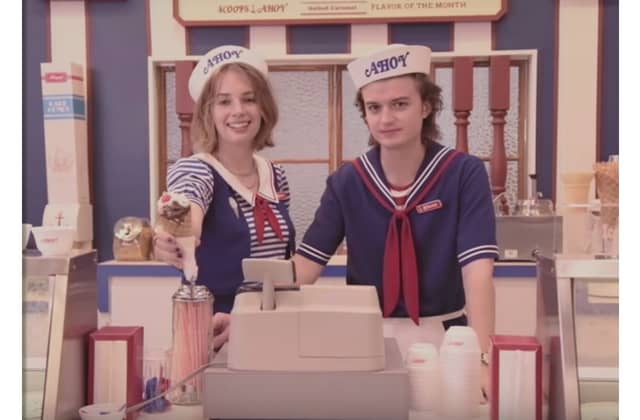 The first teaser for the third season of Stranger Things has just dropped, revealing the series' release date...

If you’re eagerly awaiting the release of the third season of Netflix’s Stranger Things, then you’ll be pleased to know that the first teaser trailer for the series has just dropped. Although it’s a little, OK very, vague.

The trailer takes the form of a commercial advertising Starcourt Mall, the newest addition to Hawkins’ retail landscape. The 87-second clip features close-ups of stores and describes the mall as having a “state-of-the-art food court [for the] gorwing patriotic community.”

Steve makes an appearance in the clip, working as an ice cream scooper at the new local parlour, alongside series newcomer Maya Hawke. There’s no other sightings of any other cast members, however.

Just when the clip ends and you’re left somewhat confused as to how this all ties in with the show but thinking that it will all likely be explained soon, it’s revealed that the third season won’t premiere until next summer. Yes, as in one year from now. Ouch.

While you wait for the third series, find out more about the novel that’s in the works based on Eleven’s mother.