In conversation with the artist
September 22, 2018
Meeran Mekkaoui 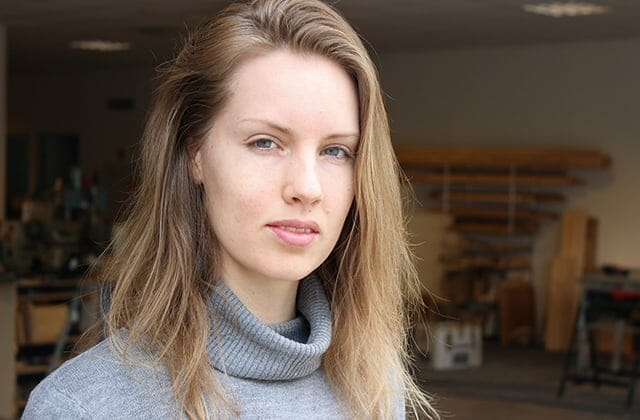 In case you've ever wondered how art and science go hand and hand, hear it from an expert herself...

since its inauguration in Dubai in 2016, the MB&F M.A.D.Gallery has been a hub for some of the most captivating pieces made with mechanical and kinetic elements by both Middle Eastern and international artists. Now, Dutch artist Jennifer Townley has brought her extraordinary pieces to the Middle East to celebrate the gallery’s new space at The Dubai Mall with a four-month-long exhibition.

In town for the launch, Townley sat down with Buro 24/7 Middle East’s to discuss the five limited edition pieces, how her art features shapes and forms with constantly evolving patterns that have been inspired by Morocco, her advice for emerging artists and the Middle East…

What was the inspiration behind the five new art pieces?

It’s all different. For example, for the Cubes, I was actually in Morocco a few years ago and the diamond shape is all over the tiles, the walls, the floors. Just like here [in Dubai] actually. It’s my favourite pattern too and I really love the Islamic patterns and its geometrical forms. So I was looking at some pictures and I found it so interesting how your brain can make a cube from just some simple lines. I was wondering if I would make the cubes move and take it into real form and to see if someone’s perspective would be changing constantly. So you have all of this extra difficulty of looking to see if there is another cube or if there is just one.

Yes. But, sometimes optical illusions can kind of hurt your brain a little bit (laughs).

Your pieces blend kinetic energy and art. How did you get into the science behind all of it?

When I was in school, I started making machines. In the course that I did, they were asking us to make something that addresses more than one sense. That was the first assignment I had so I decided to make a machine that made noise. I made this pretty ugly machine that just made so much noise and they liked it, but I didn’t like it all. I hated the sound that it made but I did really enjoy making the machine and how I could make something move. So I decided to make silent machines that were just beautiful, so it didn’t fit the course at all. But I did find what I wanted to do from that.

Why did you decide to only create one-of-a-kind pieces rather than focus on simpler designs and create many more of that one style?

For me, the most interest part is the making process. I usually don’t start with a finished idea, that’s why it takes me so long to create one piece. I start with something small, then I think of something else, and I just try to combine it or else I throw it away and start over. That is the part I enjoy the most. I think also, it takes me so long because I really enjoy doing it. I don’t think making a lot of small ones would be very interesting to me because of the process. I have many people saying that I could make more, sell more, but I don’t listen (laughs).

What keeps you going?

Well, to be honest, it’s that I don’t know what else to do! I really don’t know what to do. Maybe it will change later but there is nothing else I’d rather be doing. Since I was little, I always lived without a lot of money and you know, when you can’t buy a lot of stuff, you end up not needing it anymore.

Because you’re an independent artist, was that one of the challenges you faced?

Yes. I’ve been working for a long time without success, like any artist. It takes a while before you get any good and during that time, you get so used to not having any money and do not have to make decisions commercially that you kind of just forget about it. But after a while, once you become better, you sell something, then you really appreciate it when someone buys it. It’s not really the reason why you made it because if you didn’t sell it, you would’ve made it anyway.

You’ve showcased your works all over the world, including the MB&F M.A.D Gallery in Switzerland, so this is your second time showcasing your works with them?

Yes. I did an exhibition with them a few years ago in Geneva and they actually sold everything. So that’s why they needed to wait for another three years for me to create the pieces. It’s because I actually work quite slow.

What do you want people to take away from your works?

I hope that they will feel relaxed. It takes a little time to see what’s going on in my pieces. If you’re just walking by you won’t really see what’s going on or if it’s moving, but if you take the time and just stare at it, then you’ll notice something is happening. I hope that in that time, you will be able to just breathe and get a bit conscious about yourself by being in the moment. I tried to be the opposite of the modern world with everything negative that is going on around us.

There isn’t a lot of female artists in this industry. Did you always receive support for achieving your dream?

I did. My parents really never interfered but they did always come up with other jobs that I can do. But, they never told me that it was better for me to do something else.

There’s a huge amount of digital art these days. Has the digital industry helped you in any way?

I think on one end, it has made my life now, possible. It’s very easy to spread your works and get attention, and it has definitely been something positive for me. But on the other end, I find it very difficult to capture my pieces in a short movie for a few seconds. I tried to make the videos as realistic as possible.

What are your thoughts on the art scene in the Middle East?

I don’t know. I haven’t been here too long to know. But from what I have seen, there is a lot of art here in the Middle East. The way everything is built, with all of the patterns, they have a very good idea about they want to make stuff, which is I think, brings everything together. There is more of a common idea of what people here think is beautiful.

Do you think that there was anything here in Dubai that could be your source of inspiration for your next piece?

Definitely! All of the patterns.

Don’t take advice from anybody! (Laughs). Just hold on and do what you think is best for yourself. Because a lot of people, they try to give you a lot of advice because they’re more successful or they’re older, or whatever reason, but if you’re not an artist yourself you can’t say what he or she should do because you don’t have the same state of mind. Just do you.

The exhibition will run from September 18 to January 18, 2019, at the MB&F M.A.D Gallery in The Dubai Mall’s new Fashion Avenue extension.

Now, find out why this David Hockney painting could potentially break this record at the next Christie’s auction.