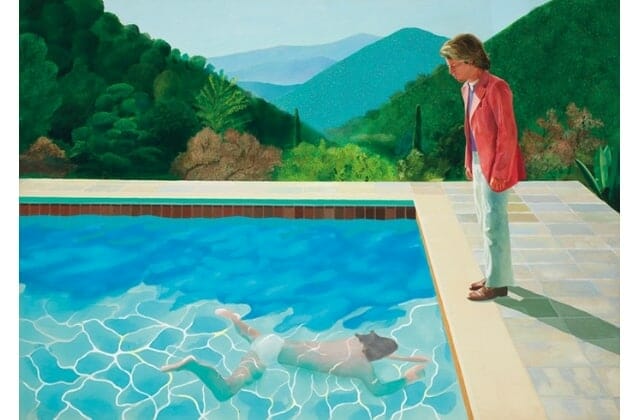 Christie's New York has just announced that a David Hockney painting will be up for grabs at it next auction and the estimated price is staggering...

Christie’s is famed for its auctions around the globe, and its next even in New York is set to be one of its biggest in recent history thanks to one particular piece.

David Hockney‘s Portrait of an Artist (Pool with Two Figures) will be up for grabs in November and is expected to fetch somewhere around USD$80 million (approximately Dhs295 million).

According to The Guardian, the piece is reportedly owned by Bahamas-based billionaire Joe Lewis (who is the owner of Tottenham Hotspur) and if it sells for the estimate, or even close to it, it will become the most expensive piece of work by a living artist sold at auction. Jeff Koons currently holds the record for the sale of his Balloon Dog (Orange) in 2013 for USD$53 million (approximately Dhs195 million).

Portrait of an Artist (Pool with Two Figures) was most recently part of Hockney’s restrospective at the Tate Britain and, according to Alex Rotter, the Co-Chairman of postwar and contemporary art at Christie’s, it is “one of the great masterpieces of the modern era.” He added, “David Hockney’s brilliance as an artist is on full display with this monumental canvas, which encapsulates the essence of the idealised poolside landscape, and the tremendous complexity that exists within human relationships. With this painting, Hockney cemented his placement within the realm of history’s most venerated artists, and come November it is poised to become the most valuable work of art by a living artist ever sold at auction.”

Until then, find out more about the new Jameel Arts Centre that will open in Dubai in November.