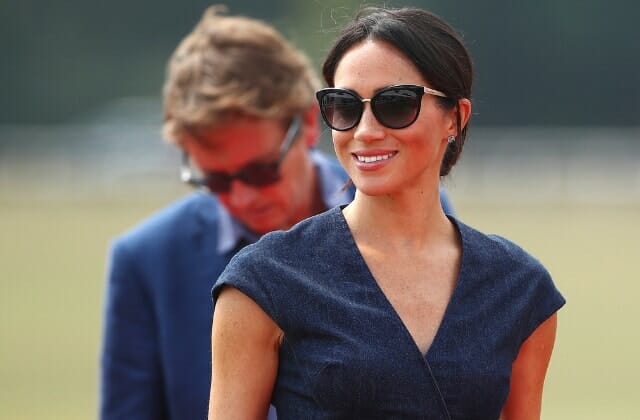 Meghan Markle has been in the public eye for quite some time, thanks to her role as Rachel on Suits however the American actress was catapulted to a global style and beauty icon upon announcing her engagement to Prince Harry last year. Since officially becoming a royal, Meghan has taken a distinctly welcoming approach to both her wardrobe and beauty looks, opting for relaxed silhouettes and barely-there makeup.

Her friend, and the makeup artist responsible for her wedding day maekup, Daniel Martin has spoken previously about her big day beauty and now the Dior Beauty ambassador has shed more light on the Duchess of Sussex‘s personal makeup do’s and don’t’s.

It all comes down to her approach, he tells People. “She’s gotten more comfortable doing her own makeup. She loves makeup and she’s good at it. She’s been doing her makeup herself. She’s not fussy, she’s just trying to get it on and get out the door.”

As for her current preferences, Martin says, “She likes a stronger eye, her brow is more defined now, but it’s still her. If anything, she’s going to experiment with different tones, and now that she’s more tan she’ll use warmer colours. But she doesn’t stray too far from her technique, she’s very formulaic with her routine.”

Interestingly, there’s one thing you’ll never seen her sporting — a bold lip. Martin explains, “The one time she did a red lip, she just didn’t feel comfortable in it. She likes to talk and she’s not a fussy person so she doesn’t want to have to worry about anything.”

The makeup artist also shared how her wedding day beauty was more about the skin than it was about products. “She has great skin. She couldn’t have a tonne of makeup on because it would look so different in every variable, so less is more. It was literally skin care, a bit of foundation selectively and concealer, but that’s when you really saw her skin come through.”

He says the impact of her look has been global and has shown women, young and old, that they should embrcae themselves more. “It’s about owning your beauty. We’ve been inundated on social media with contouring and highlighting and it’s created this narrative that you need so much makeup to be beautiful and I think that day when they saw her, it was just her looking beautiful with not a lot on. They embraced her rather than her face first and that was the intention. I’ve had so many mums reach out to me saying thank you for showing my 14-year old daughter that she doesn’t need to go to school with so much makeup.”

Now, find out all the details we know so far about the Duke and Duchess of Sussex’s upcoming royal tour of Australia.