FROM FLOWERS TO FRAGRANCE: AT CHANEL’S MAY ROSE HARVEST 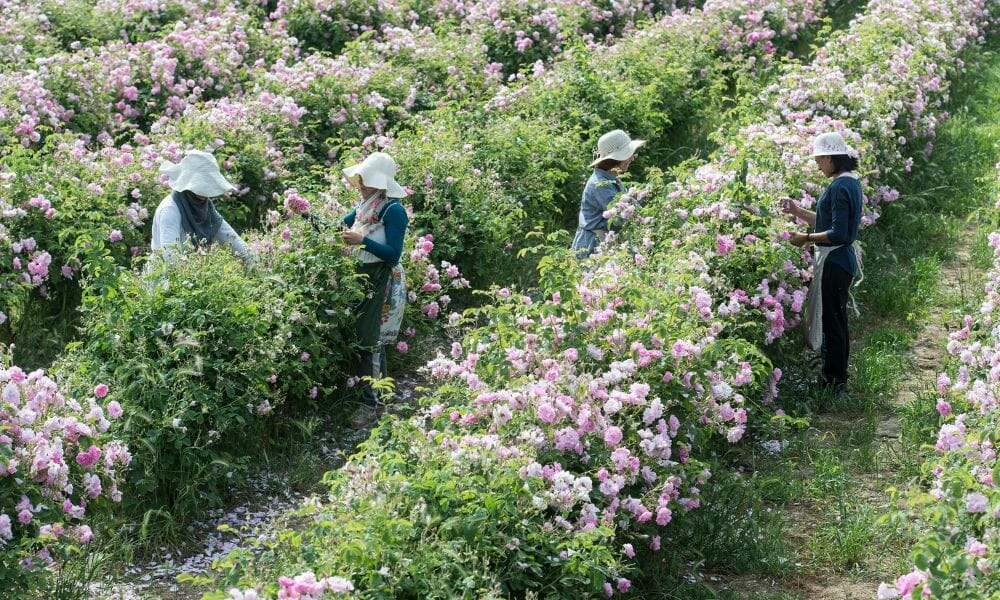 Join us on a day out in the fields with Chanel as we discover an intimate scent journey in the heart of Grasse...

In the world of perfumery, Chanel’s iconic N°5 fragrance is synonymous with victory. Created in the south of France in 1921, the perfume has won the world over for its renowned formula, using only raw materials of excellence, of which, its key ingredients are from the cultivated flowers of Grasse.

Steeped in heritage, not only has it become a cherished place that is ultimately the birthplace of Frenchy perfumery, but in Grasse, it is where the relationship between Gabrielle Chanel’s iconic N°5 Parfum and the region began in 1921 when Ernest Beaux chose the jasmine flower for the scent. It was a decision that has since evolved over decades into a strong partnership between the Maison and the Muls, a family of farmers who are now a vital part of Chanel’s olfactory journey.

Frozen in time, it was in 1987 that Chanel signed an unprecedented partnership agreement with the Mul family which will allow them to secure the number of high-quality flowers needed to create its fragrances – all whilst simultaneously helping to sustain the production of Grasse’s fragrant plants.

As the largest producer in Grasse, the Mul family cultivates five exceptional crops throughout the year – think the May rose, jasmine, tuberose, geranium rosat and iris – all of which are reserved exclusively for the composition of Chanel fragrances. Chanel N°5 would go on to become an icon of the house, and a century on, its formula remains faithful to the original. In fact, one of the key ingredients is the May Rose, the exquisite flower that anchors the Maison’s signature scent.

Whilst opportunities to visit the fields of Chanel are as rare as they come, we were lucky enough to join the harvesting of the May Rose in the Chanel Bastide and have the privilege to go behind the scenes to discover the entire scent journey.

Upon arrival, we were met with unparalleled views of lengthy flower fields that scented the winds with the richness of centifolia roses. With a backdrop of idyllic scenery of lush greenery and majestic mountains, we met the patriarch Joseph Mul and his son-in-law, Fabrice Bianchi, as they took us through the fields describing the history of their partnership with Chanel, the variety of the rose and how harvesters work in clockwork, moving from bush to bush to pluck roses in full bloom.

With the harvest season only being three weeks long, enough roses need to be gathered for the year with each harvester picking around 5kg of flowers per hour (1kg of roses is around 350 flowers, so let that sink in).

During our private tour, we also learned about the sustainable practices and the importance of including chemical-free fertilisers in order to prioritise crop health, consistency in quality and avoid soil and crop depletion over time, ensuring a legendary heritage stands the test of time.

“It was my father, who was the House’s ‘nose’ before I came along, who had the idea to work with the Mul family,” reveals Olivier Polge, Chanel’s fourth in-house Perfumer-Creator. “During a time when the idea of maintaining a close connection with the flowers, protecting the land, and supporting responsible agriculture wasn’t trendy at all. No one was doing it.”

Our interest and respect for artisanal perfumery soared as we realised the task was much harder than it looks. Armed with gloves, an apron and Chanel gum boots, we were tackled with picking the roses according to a traditional method that consisted of grasping the head of the flower at its base. After managing to grab a few buds of the delicate centifolia rose, we placed them in our aprons as we made our way through the picturesque province.

The meticulous process doesn’t stop at the harvesting exercise. To ensure the quality and freshness of the flowers, the roses that were picked earlier are harvested on the same day to ensure their freshness.

From aprons to burlap bags made of jute (which allow the blooms to “breathe”), the roses are taken to a facility situated next to Muls’ flower fields. It is here where we witnessed the harvested flowers being weighed, processed, and poured into stacked trays, stirred, and brought to a high temperature where a solvent absorbs the fragrant components of the flowers. Because of its high temperatures, the process helps to absorb and release the flowers’ fragrance in its purest state.

The result? The rose extracts have turned into a fragrant wax – also known as concrete – where it is transformed into an absolute, the liquid used in the formulation of Chanel’s N°5 extract. Approximately 400kg of roses are needed to produce 1kg of concrete.

This is where Polge then comes in, where he blends the concrete with alcohol several times in mixers before acing the levels that go into the signature scent.

It’s quite remarkable to witness the process from flowers to fragrance. The extreme savoir-faire, effort, and know-how of the Mul family is taken into consideration when poured into every bottle of the iconic Chanel N°5. The next time you pick up Chanel N°5, think about what goes into the iconic perfume that makes it timeless and legendary.