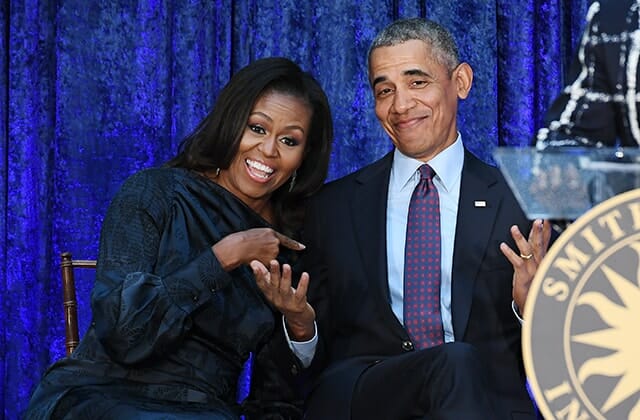 In case you’ve been wondering what Barack and Michelle Obama were up to, we finally have the answer. The former President and First Lady of the United States are reportedly launching a podcast production with Spotify.

First, the power couple went from presidency to production by launching their newly-created production studio, Higher Ground Productions, which then led them to sign a multiyear deal with Netflix in 2018. Now, a new division of the Higher Ground production company has been added and it will include all things audio.

Set to develop, produce and lend their voices to select podcasts on a wide range of topics, the Obamas’ Higher Grand Audio company has teamed up with Spotify for the release.

According to Variety, the President Obama released a statement to Spotify and said: “We’ve always believed in the value of entertaining, thought-provoking conversation. It helps us build connections with each other and open ourselves up to new ideas. We’re excited about Higher Ground Audio because podcasts offer an extraordinary opportunity to foster productive dialogue, make people smile and make people think, and, hopefully, bring us all a little closer together.”

Former First Lady then added to that and said: “We’re thrilled to have the opportunity to amplify voices that are too often ignored or silenced altogether, and through Spotify, we can share those stories with the world. Our hope is that through compelling, inspirational storytelling, Higher Ground Audio will not only produce engaging podcasts, but help people connect emotionally and open up their minds — and their hearts.”

Whilst there are no details on when the first Obama-cast will be released, we know it’ll be great.

And if we didn’t already adore the Obama’s, we absolutely do now.