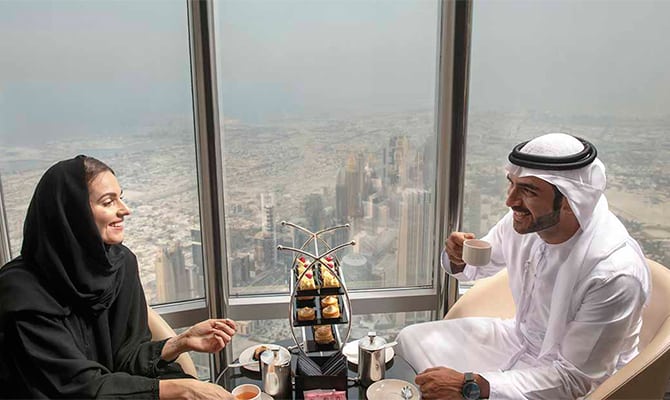 This Dubai location just earned itself a Guinness World Record, and it stands at 585.36 metres high…

It’s no surprise that Dubai is home to an impressive skyline that consists of world-renowned skyscrapers including the Burj Al Arab, Burj Khalifa and the Gevora Hotel— all of which have earned several Guinness World Records.

Now, it seems like the world’s tallest building, Burj Khalifa, has added yet another feather to its world-breaking cap and, we’re not totally surprised.

Standing tall at 585.36 metres high, Burj Khalifa’s The Lounge has been given the title as ‘Highest Lounge in a Building’, earning itself (and the city) another Guinness World Record.

A unique dining experience that sits between the 152nd and 154th level of the building, The Lounge offers panoramic views of the entire city — a backdrop you simply can’t find anywhere else — along with delicate desserts and savouring fresh pastries to tickle your taste buds.

Now, find out where you can get your hands on Alexander McQueen’s exclusive handbag collection for Dubai.