The Founder’s Memorial in Abu Dhabi just won this award

And it's well-deserved too
October 3, 2019
Meeran Mekkaoui 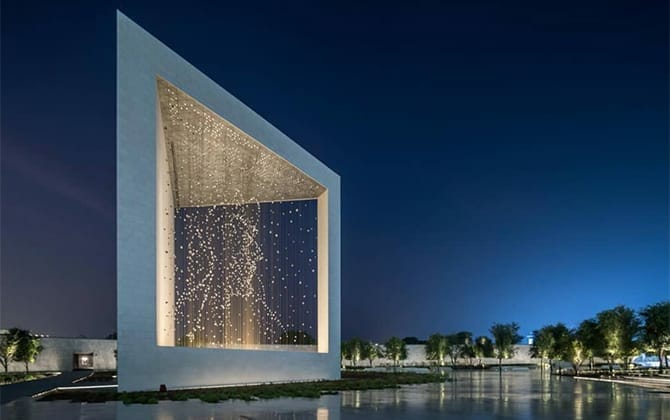 This meaningful structure in Abu Dhabi has been recognised for the way it integrates art and architecture...

For the past seven years, the Coda (Collaboration of Design + Art) Awards have been recognising unique projects across the globe that have successfully celebrated interior or public spaces that intertwine art and architecture.

For this year’s edition, a public piece of artwork in Abu Dhabi won an award for the Institutional Category.

The Constellation, also known as a star piece at The Founder’s Memorial in Abu Dhabi, took home the accolade and rightfully so.

A national tribute to the UAE’s Founding Father, the late Sheikh Zayed, The Founder’s Memorial finally opened in April 2018 (after six years of conceptualisation and construction).

Both a monument and artowrk, the Constellation is The Founder’s Memorial center piece and it sits pretty at 30 metres high with over 1,000 geometric shapes that form a multi-dimensional image.

In case you haven’t visited The Founder’s Memorial, there’s you next weekend plans sorted.

Also, find out which final artists have been announced as the Abu Dhabi Grand Prix F1 headliners.