Hermès exhibits at SIHH 2018 for the first time

And here's what they had on display...
January 17, 2018
Maddison Glendinning 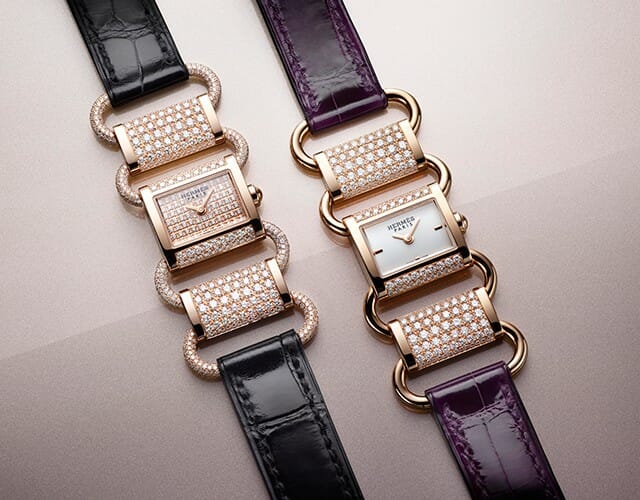 Hermès unveiled a new series of novelties at yesterday's SIHH fair. Buro 24/7 Middle East was present for the first look...

SIHH 2018 has been one of the fair’s most interesting yet with a vast array of incredible watches being unveiled and new exhibitors adding their own touch to proceedings. One such new exhibitor is none other than French luxury brand Hermès who is showing at SIHH for the very first time this year.

Although in fashion the brand is entirely French-made, when it comes to watches the house was one of the first non-watchmaking brands to settle in Switzerland and all of its watches are produced in the country. 2018 marks 40 years since the brand first begun its foray into watchmaking and it is showing no signs of slowing anytime soon.

For Hermès “time is not a constraint” so when it comes to watchmaking the brand instead prefers to “express lightness, fantasy and a little humour,” as explained in its presentation. Interestingly, a spokesperson for the brand also said that “the only purpose to Hèrmes being in the business is quality and creativity” and noted that in 1997 the house designed the Double Tour in leather under Martin Margiela which has since “become an icon of the brand and copied by many others since.”

This year, the brand has several exciting launches to look forward to. The first being its new Arceau Casaque range which is a daring new venture for the brand thanks to the bright colours used on the watch straps. These colours are reflective of jockey jackets and the pieces have a distinct equestrian vibe to them.

Secondly, the Klikti is a brand new design for the house which was inspired by the dainty chains worn by horses during formal ceremonies in France. This piece is available in rose gold or gem set white gold with a leather bracelet in alligator, available in single or double tour in six different colours.

And finally, the Arceau Pocket Millefiori is an update on a traditional watchmaking technique that was first introduced by the brand in 2014. This piece is limited and numbered and is finished with a matte black alligator caseback and strap.

See the new novelties below…

Then, discover the new designs from Van Cleef & Arpels that were unveiled during SIHH earlier in the week.