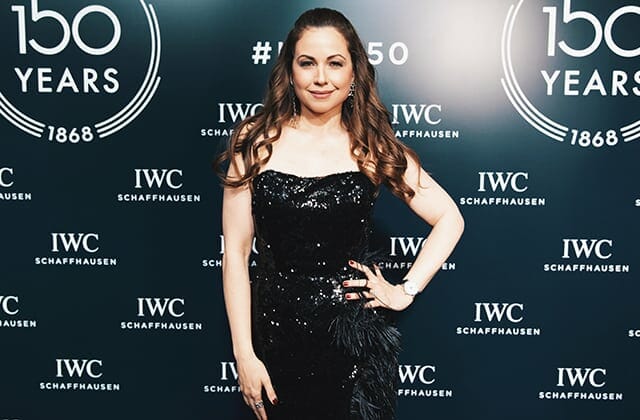 Last night, IWC brought its 150th anniversary celebrations to Dubai and with it, one of its top regional ambassadors...

Sitting on the 112th floor of the Burj Khalifa to interview Raya Abirached is no ordinary way to spend a Wednesday afternoon. But then, IWC is no ordinary brand. The Swiss watchmaker is celebrating its 150th anniversary this year and is making sure to celebrate in style across the globe, kicking things off with a monumental party at SIHH in January.

This week it’s Dubai’s turn, and we caught a few minutes of Raya’s time (she is a regional ambassador for the brand and describes it as being “a natural progression from an already existing relationship because I was interviewing a lot of their ambassadors who are movie stars”) to talk all things movies, and to hear a never-before-told story about her interview with Anthony Hopkins…

We’re here in Dubai to celebrate IWC’s milestone anniversary – what are some of the milestone moments in your own career?

I always had my firsts — my first Oscars, my first Cannes Film Festival, my first big interview, the first time I shot a beautiful cover for a magazine, the first episode of Arabs Got talent. I have a lot of firsts and I remember the feeling of all of them and that’s really nice. I’ve been in the business for a very long time and I can still remember the sensation from my first Cannes Film festival, I was like a kid in a candy store. Then there’s the many years of doing it as a mother, that was a milestone, as a wife, there’s a lot.

Who is the most impactful person you’ve interviewed in your career?

I’m a big movie lover so it has to be the directors — Martin Scorsese, Steven Spielberg, Clint Eastwood, James Cameron — these people have infused a love of cinema for me. Then you have movie stars that have a certain feel, they have this electric celebrity [vibe], that is different from others — the likes of Oprah or Brad Pitt. They’re so famous they ooze this celebrity that kind of circles around them and you do feel impacted by interviewing them moreso than those who are equally super famous.

One of my favourites is Hugh Jackman. He’s an amazing guy, and he’s so approachable as well. You don’t feel like you don’t know the real him.

Who were you most nervous to interview?

You’re always nervous to interview the ones that people have told you are difficult and that becomes a challenge. Anthony Hopkins for instance, I remember the first time I interviewed him, I’ve never told this story before actually! I just remembered it. He was literally cutting his interviews down. It was a press junket so there were a lot of people before me and he was cutting the interviews with most of the journalists because he wasn’t suffering fools and was  saying, “I don’t like your questions”. So they were all coming out of the room completely disheveled and I’m sitting there thinking what am I going to do? I was lucky, after my second question, he turned around and he said [to his people] “You see, when it’s good it’s good!” and he turned back around and I thought well he’s not going to fire me! [laughs].

And the most memorable, for good or bad reasons?

I did a big interview with Cate Blanchett in December and I had interviewed her many times before but this was more of anthology of her career and we spoke about the #MeToo movement that started last year, the privacy that she has with her children and that was a very memorable interview. I am a big fan of hers. If I was to be a movie star, I’d want to be her.

They are! Nicole Kidman also. There’s such a misconception about Nicole because she’s a giggly lovely girl but people think she’s think unattainable icy girl. I would say she’s the most misperceived of celebrities. And then Margot Robbie, the most beautiful girl in the world. People always ask me why I don’t like plastic surgery and I’m like, because Margot Robbie exists! [laughs].

You mentioned the #MeToo movement which has inspired a whole lot of females around the world. You also serve as an inspiration for lots of young women in your role…

I hope to and if I do I hope it’s for the right reasons.

Who is it that inspires you?

I look up to every woman that multi-tasks her life. I root for the girls that are mothers and entrepreneurs and hard-workers. I root for the opposite of what’s going on these days on social media where girls tend to think that posting a picture is a career. I root for the ambitious women, the women who help other women.

In your industry, do you find that there’s a camaraderie between the women or not so much?

There is when the women are similar. But I’m the first to admit that when they’re not there’s that kind of annoyance. It’s not a nice feeling to have, and not one I like having, but I am a little taken aback by women who don’t feel like you have to earn things in life. It’s not to criticise, I just don’t relate to them. They’re not the ones I root for whereas I wholeheartedly root for the others.

I root for the girls that are mothers and entrepreneurs and hard-workers. I root for the opposite of what’s going on these days on social media where girls tend to think that posting a picture is a career. I root for the ambitious women, the women who help other women.

Which Arab movie talents, be it directors or actors, are you most excited by?

Well of course Hind Sabri who I introduced to IWC and is now their main brand ambassador for the Middle East and is a fabulous talented, beautiful mother — exactly the type of woman who inspires me. A lot of the Egyptian actresses; Menna Shalabi who is this young actress that has this fierceness to her. Dora Zarrouk is another. And of course, Nadine Labaki who is a longtime friend and a director and an actress.

She’s nominated for the Cannes Film Festival this year, right?

Yes she is now in official competition at the Cannes Film Festival which is unprecedented for an Arabic film. I think it’s been 20 years.

The limelight is on Arabic cinema these days. There’s a huge curiosity coming from Hollywood, to opening cinemas in Saudi, they want to establish working relationships with companies in Saudi. It’s an interesting time.

That’s interesting you say that because it’s important for there to be positive dialogue around the Arab world and that the West’s perception of the Arab world changes. Cinema is a way to do that…

Yes, of course it is. I’ve been doing this for 20 years and I never would have thought 20 years ago that I would go to the Oscars with an Arabic film, that an Arabic filmmaker like Hany Abu-Assad would direct Kate Winslet in Mountain Between Us or that Haifaa al-Mansour gets the opportunity to do a movie about Mary Shelley — those parallels with real life are really interesting and uplifting.

It is. I think the main problem that we had with Arabic cinema is that a) we didn’t dare write honestly and b) people around us never thought that cinema was an industry you could profit from so it was always a little dismissed. Oh you’re a director by night, but be a banker by day, kind of thing. So for all of those reasons, now that perceptions are shifting people have a lot of admiration of and curiosity around filmmaking.