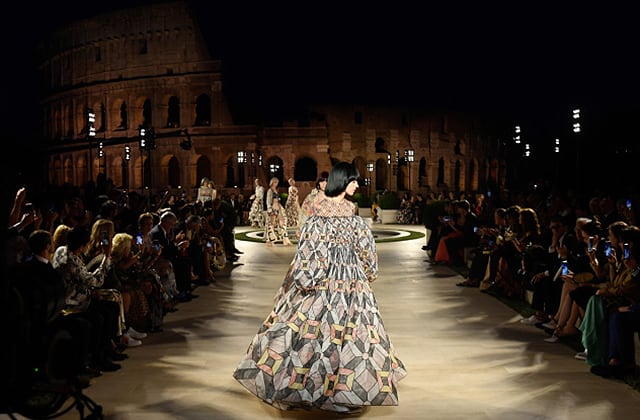 Fendi celebrated its relationship with the Eternal City of Rome with a new coveted couture collection...

In the eternal city of Rome, luxury label Fendi paid tribute to the long-standing relationship with its former Creative Director Karl Lagerfeld with a spectacular fashion show set that consisted of a couture collection that was as dreamy as it was delicate.

The Italian brand sent a total of 54 new couture looks down the runway amid the ruins of ancient Rome (at the ancient Temple of Venus and Roma, to be exact), each look representing one year the late designer worked at the fashion house — it’s also the longest collaboration in history for any brand.

The Haute Couture Fall/Winter ’19 couture collection was the first in the fashion house’s post-Lagerfeld era and the looks (of which, 21 of the pieces were non-fur), celebrated the cinematic allure of a Roman woman. Geometric patterns, mosaic-style effects, intricate beading and laser cut detailing, have been injected into a slew of empress dresses, relaxed suits, oversized coats and a slew of statement accessories, including the Baguette bag which received a supersized makeover.

Browse through our favourite looks from the collection now…

Also, did you know that there’s a new makeup line by Karl Lagerfeld in the works?