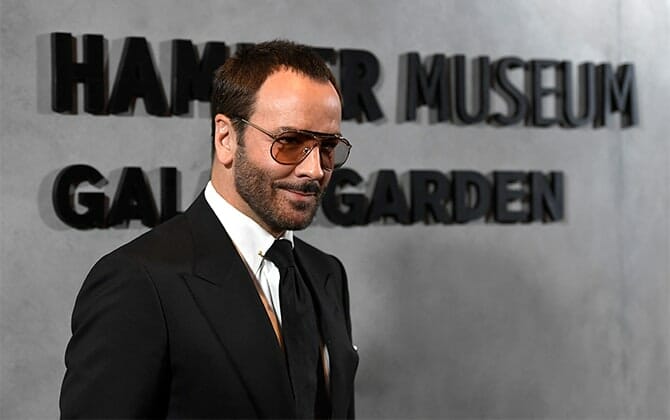 Tom Ford is set to deepen his ties with Hollywood as he heads to the City of Angels for Fall/Winter '20...

Tom Ford‘s trajectory this year has proven to be successful as not only did he have a strong start to the year by being named CFDA’s new chairman but also, launching a skincare line. And, it seems like there’s plenty to look forward to in the new year too.

Tom Ford is set to take his next Fall/Winter ’20 runway show to the West Coast on February 7 — two days prior to the Oscars.

Already known as a red carpet guru, the American designer will rule the runway in Los Angeles — a move that felt very natural to Ford.

“It is my home, and has a strong impact on the way that I live and work within both the fashion and film worlds,” Ford said. “This year the New York Fashion Week calendar exactly overlaps Oscar weekend, and the last time that happened I showed in LA and it worked quite well. There is an excitement in L.A. on that particular weekend and the relationship between film and fashion is a strong one.”

Whilst the decision to move operations to Los Angeles for the season comes as a surprise (since the CFDA have been focused on bolstering New York Fashion Week), the priority remains the same.

“In my role as chairman of the Council of Fashion Designers of America (CFDA), my main intent and priority is to globalise and bring attention to American fashion. There is truly no bigger or more prominent stage in the world at any given time than Los Angeles during the Academy Awards.”

We’ll just have to wait and see what Tom Ford is cooking up for next season, as well as who he’ll dress for the upcoming awards. Stay tuned!

In other fashion news, it seems like the force is with Vetements as they reveal their latest collaboration.