September 28 could not come any sooner
September 20, 2018
Meeran Mekkaoui

With just days away from making his Celine debut at Paris Fashion Week, Hedi Slimane just revealed yet another detail...

Now that Riccardo Tisci has made his much-awaited debut at Burberry, all eyes are on Hedi Slimane as the fashion industry waits for his debut for Celine at Paris Fashion Week on September 28. With just a few days to go until we see what he has creatively visioned for the maison, the brand has been releasing several teasers leading up to the big reveal.

Following a string of hints that includes Slimane’s first handbag design (which was first spotted on Lady Gaga), revealing a new, accent-less logo, two images from the designer’s debut campaign for the brand, as well as de-activating Celine’s e-commerce platform, the former Saint Laurent Creative Designer has just unveiled another exciting detail ahead of his debut and this time, it’s about the show venue.

Announcing the news via Instagram, Slimane’s debut show is set to take place at one of the city’s most symbolic buildings, the Hôtel des Invalides. The location shares a particularly special history with Slimane as he staged his Fall/Winter ’14 menswear show for Saint Laurent at the same location. 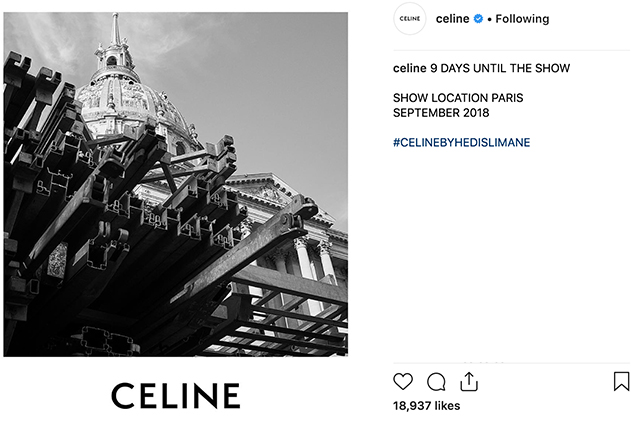 With only eight days left until the big reveal, Slimane might continue to tease us with snippets of what to expect so stay tuned!

Now, find out how you can win a ticket to the Givenchy S/S’19 show in Paris.