A first of its kind partnership
February 19, 2018
Maddison Glendinning 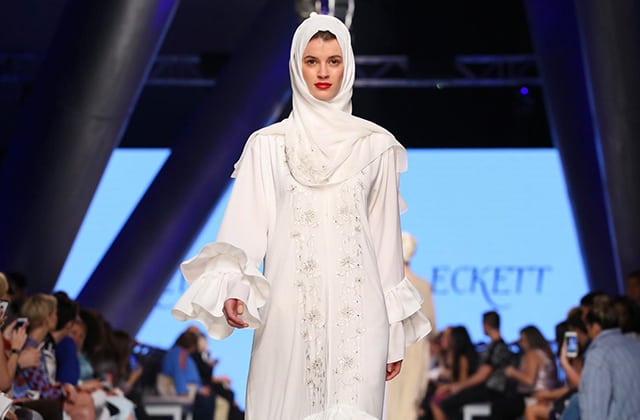 The Arab Fashion Council has announced a new strategic partnership with the British Fashion Council to solidify the region's fashion industry. Here's what you need to know...

In December of last year the Arab Fashion Council (AFC) announced that it would open an office in Riyadh, Saudi Arabia to help “develop a sustainable fashion infrastructure in the country.”

Now, the AFC has revealed a new partnership with the British Fashion Council (BFC) to help solidify its goals. The new partnership’s most exciting venture is the establishment of the first Arab Fashion Week in the Saudi capital.

The purpose of the opening of the AFC’s office in Riyadh was to help nurture local talent as well as shepherd international designers looking to break into the Arab market. As such, the inaugural Arab Fashion Week is set to take place from March 28-31, 2018 and will focus on “ready couture”, a term that AFC has bought the rights to according to WWD.

Jacob Abrian, the Founder and Chief Executive Officer of the AFC told the site, “We are addressing the new generation of haute couture clients. Paris used to be the centre of couture, where all designers would want to establish themselves, but social media is changing this. Now the same princess that used to spend $1 million for a single haute couture dress has to attend two or three events every week. Given the popularity of Snapchat in Saudi, she cannot appear in the same dress twice and her budget becomes divided. The AFC is recognising these changes [fueled by] social media and defining this new concept of ready couture.”

WWD also reports that BFC CEO Caroline Rush is on board to help guide the implementation of the ‘ready couture’ category with international retailers and brands.

As part of its focus on the millennial market, the AFC will also partner with Harvey Nichols Riyadh to allow high net worth clients to meet the participating designers and order pieces via trunk shows.

Stay tuned to Buro 24/7 Middle East for more information on what to expect from the upcoming Arab Fashion Week. In the meantime, see the new coffee table tome by Marriam Mossalli celebrating street style in Saudi Arabia.