Roberto Cavalli and Jean Paul Gaultier are on the list too...
March 19, 2018
Meeran Mekkaoui 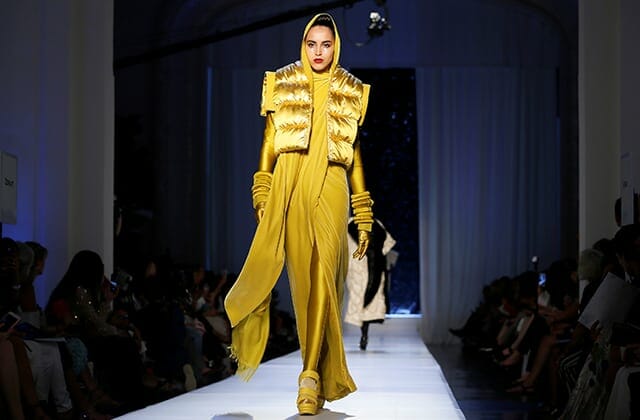 Some of the region's leading designers and brands are headed to Saudi Arabia for the country's first Arab Fashion Week and the line-up has received a royal's approval...

Towards the end of last year, the Arab Fashion Council (AFC) announced some exciting news and has revealed that it would open an office in Riyadh, Saudi Arabia, and this was shortly followed by the announcement of a new partnership with the British Fashion Council (BFC).

Because of the new partnership, the first Arab Fashion Week in the Saudi capital will take place later this month and the schedule for the highly anticipated event has just been released and we couldn’t be more excited.

Set to take place at the capital’s Ritz Carlton Hotel, a plethora of Middle Eastern designers are scheduled to showcase their latest collections, including two international coveted names who are specifically jet-setting into the Middle East for the occasion.

On the regional front, expect to see new collections from Saudi Arabia’s Aram Designs, Reem Kanhal, Swaf, Mashael Alrajhi and Arwa Al Banawi (who recently teamed up with Levi’s for Sole DXB); Lebanon’s Naja Saade and Basil Soda will be on site too, along with the UAE’s Aiisha Ramadan and Egypt’s Asory House.

Flying in from Russia, Yanina Couture will reveal its beautiful creations, and rounding up the packed schedule is US label Fllumae, Brazilian brand Alexandrine, Italy’s Mua Mua Dolls and Kazakhstan’s Bibisara.

The inaugural event brings in a new chapter in the country’s history (which will see many positive changes happening later this year) and will also welcome Italian fashion designer Roberto Cavalli and French haute couture designer Jean Paul Gaultier as guests of honour.

According to Emirates Woman, the Arab Fashion Council’s honorary president, HH Princess Noura Bint Faisal Al Saud, said: “We are excited to see the fruits of the effort to launch this event in a relatively record period, and we thank the global support shown by the international fashion community, which strongly reflects the firm position of Saudi Arabia now only as an economic force, but also as a cultural and creative hub.”

Whilst no further details have been announced, stay tuned to Buro 24/7 Middle East as we bring you more on the upcoming event next month (April 10-14).

Now, find out who the 2018 CFDA Award nominees are.

This article has been edited to reflect the new dates communicated by the Arab Fashion Council on March 26, 2018.