Picture perfect: Lama Jouni’s new F/W ’18 collection was made to be photographed 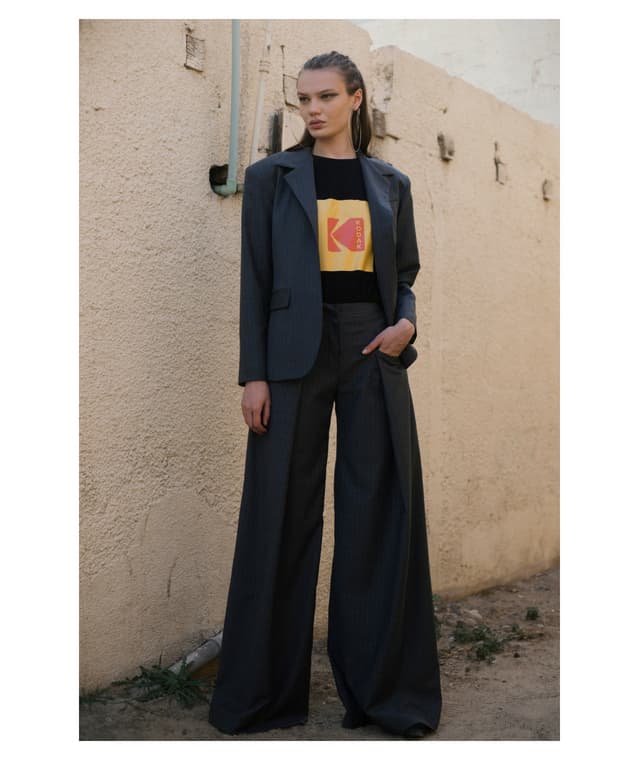 Dubai-based designer Lama Jouni has just released her F/W '18 collection, inspired by none other than Tupac Shakur...

Lama Jouni has fast made a name for herself in Dubai thanks to her contemporary designs. Made for cool women, in flattering silhouettes, the pieces have repeatedly found themselves on fashion-forward faces in the region and beyond — Bella Hadid has sported her pieces this year and so too has Jasmine Saunders.

This season, Lama was inspired by the golden era of hip hop, the 1990s, particularly artists like Tupac Shakur and The Notorious B.I.G. As a result, the collection is called ‘Minimal Ghetto’ with the brand’s signature minimalist silhouettes reworked into 90s-inspired silhouettes like boxy jackets, oversized suiting and wide-leg trousers. The pieces are made from velvet, leather, mohair, silk and crepe for added impact.

In addition to these pieces, Lama also collaborated with Kodak International on a range of tops. The collaboration came about after Lama “stumbled on a photo of Tupac in front of a Kodak store during her research,” according to a release. Speaking with Buro 24/7 Middle East about her love of all things photography, Lana explained, “I love film photography — its authenticity and ability to capture the reality of the moment. The process of not seeing the photos until they’re developed is what makes reliving those captured memories so much more precious.”

I can’t really choose one favourite! I love so many hip hop artists but some of my favourites are Tupac Shakur, Tribe Called Quest, Nas and Jay-Z because their lyrics always speak the truth.

Which song did you listen to most when designing this collection?

Picture Me Rollin’ by 2pac, Danny Boy, Syke and CPO were on repeat.

What does this collection symbolise for you?

This season is one of my favourites! The collection is dedicated to the dreamers and hustlers of our generation. These rappers who inspired the collection were young with big dreams and didn’t stop to pursue them until the end. I think everyone can relate to their story. Fight for your dreams and stay humble.

Minimal Ghetto will be available on Lamajouni.com from August.