And she looks so good
October 18, 2018
Meeran Mekkaoui 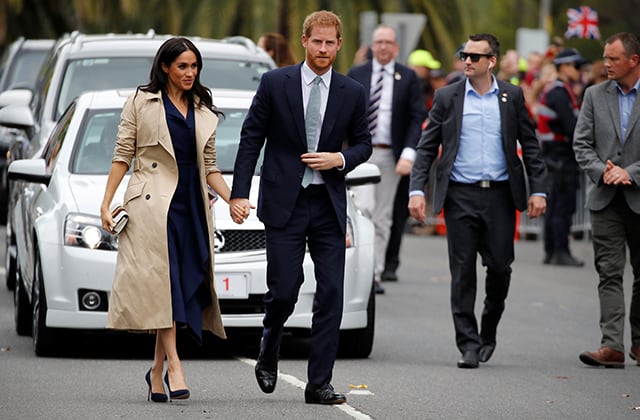 It's officially day three of the royal tour and the Duke and Duchess of Sussex have landed in Melbourne...

When Meghan Markle first stepped off the plane after a 22-hour flight to Sydney earlier this week, she looked impossibly good. And although the flight from New South Wales to Melbourne is not as long, the Duchess of Sussex still looked chic as she landed in the Australian city with Prince Harry for day three of their royal tour.

Their first stop took place at the Royal Botanic Gardens for a meet and greet, and the royal couple were spotted hand-in-hand. Meghan dressed her baby bump in two Australian designers wearing a navy Dion Lee dress and a trench coat by local designer, Martin Grant. The trench coat seems to be a staple favourite during the royal tour as she was spotted sporting the piece at earlier engagements, too.

Paired with Gucci‘s ‘Sylvie’ clutch and Manolo Blahnik ‘BB’ pumps, the mum-to-be looked as good as ever. 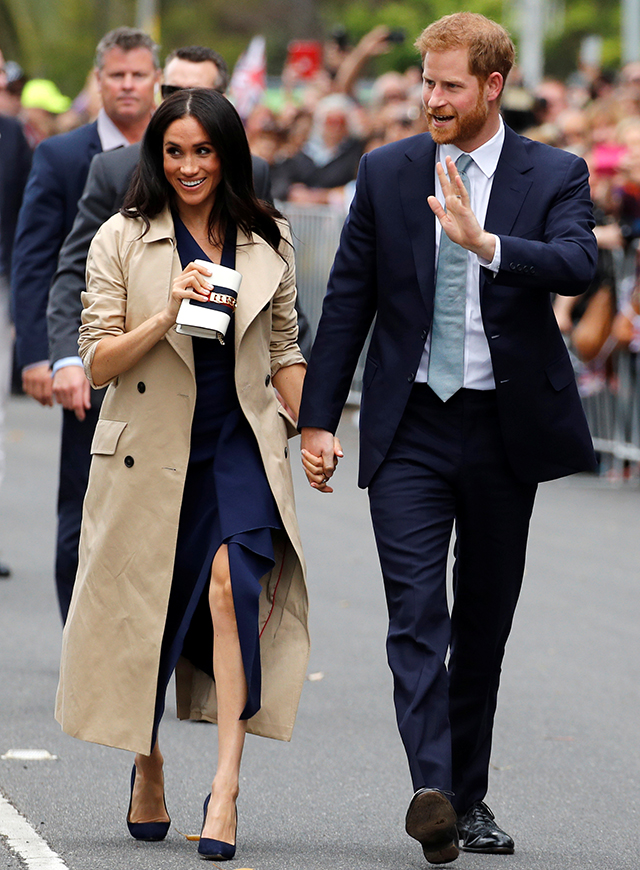 Next up, the royal couple visited a kitchen at a Melbourne social enterprise cafe called Charcoal Lane, where they learnt about Australian native bush food and this was shortly followed by an engagement at the Government House, alongside Governor of Victoria Linda Dessau and her husband Anthony Howard. 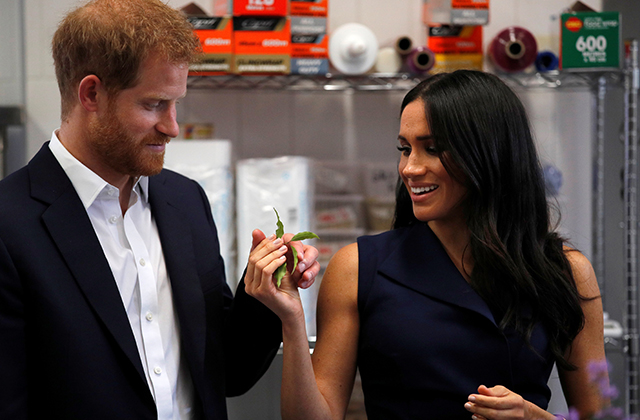 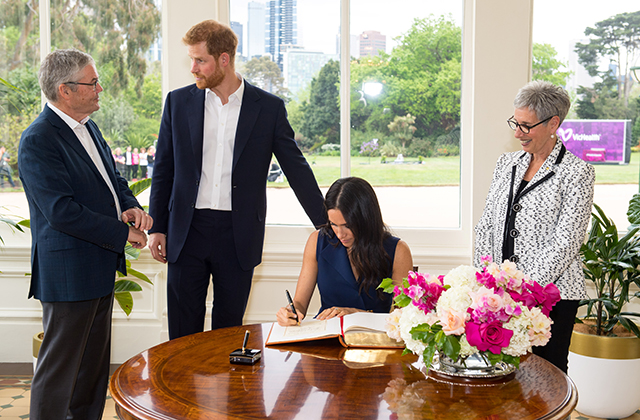 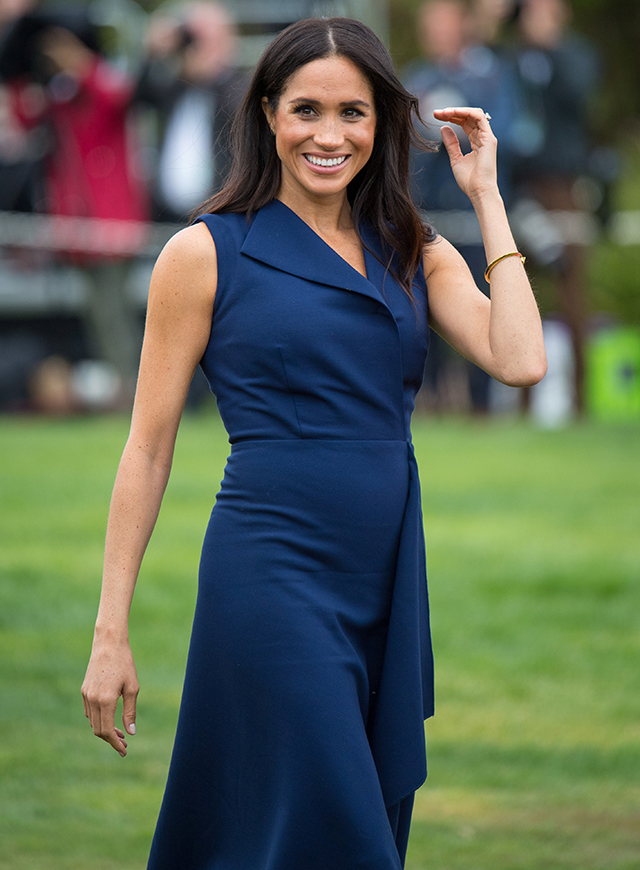 Continuing their jam-packed schedule for day three, Meghan and Harry met with student Sustainability Leaders and Waste Warriors at Albert Park Primary School to learn how the sustainability efforts and programs are incorporated into the curriculum.

The Duchess also kept in line with the sustainability theme and changed her outfit and shoes, opting for a black Club Monaco dress and switching her heels to flats made by cult US brand, Rothy’s, which are made from recycled water bottles, (read all about the brand here). 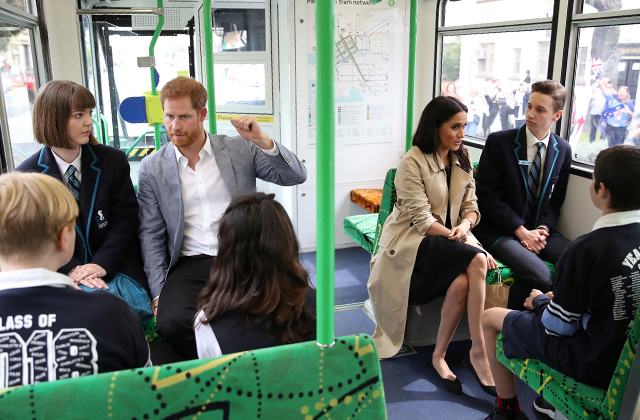 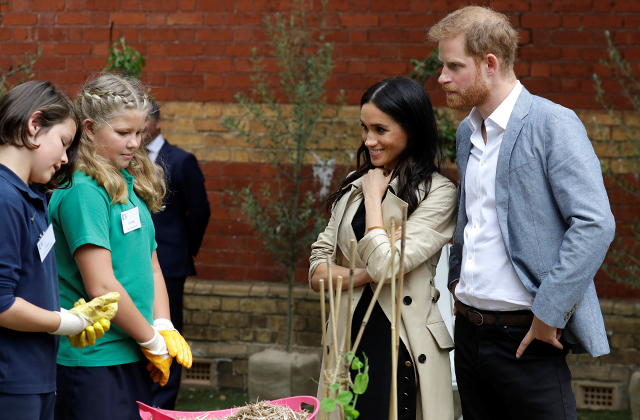 For the last stretch of their Melbourne tour, Prince Harry and Meghan Markle arrived at South Melbourne Beach to meet with volunteers from BeachPatrol and local children from the area for a beach cleanup. The organisation is dedicated to keeping the city’s shores free of litter. 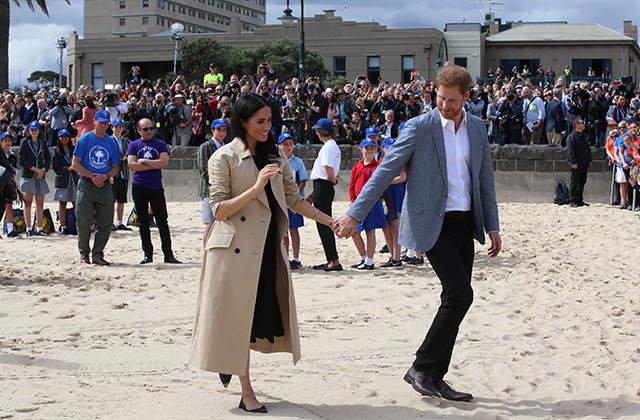 Could they be any cuter?!

Now, take a look at where you can get your hands on Meghan Markle’s latest Brandon Maxwell green dress.