Just in: Chanel announces the location of its next Cruise show

Here's where the fash pack will head next
September 6, 2018
Maddison Glendinning 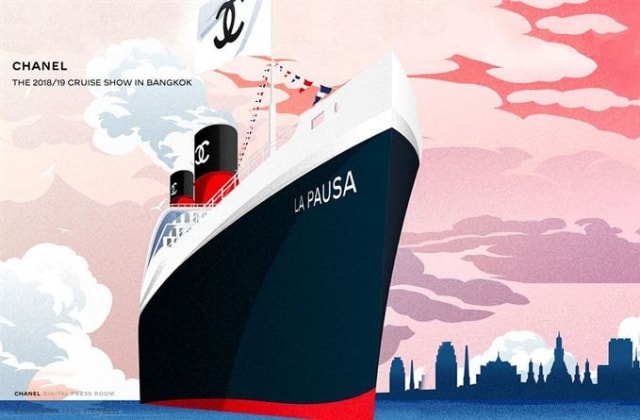 Chanel has just announced the location of its next Cruise show and it looks like the fash pack will be headed to Asia...

Chanel has made a series of major announcements concerning upcoming shows this week. Just yesterday it revealed that its next Métiers d’Art show will take place at The Met in New York on December 4, and now the brand has just announced the location of its next cruise show.

Whilst France was the location of choice for many brands this season (Gucci, Dior and Louis Vuitton among them), Chanel will instead head to Asia to host its Cruise 2019 show in Bangkok.

According to the brand, the show will be set “on the banks of the Chao Phraya river” which is known as the Venice of the East and considered to be the lifeblood of the Thailand city. In a release the brand also explained the connection between the French fashion house and the location, writing, “Chanel’s perpetual bridging of heritage and modernity is reflected in Bangkok, celebrated at once for its deep cultural roots and vibrant energy.”

The show is slated to take place on October 31. Watch this space.

Now, find out which sportswear brand Karl Lagerfeld has teamed up with on a limited edition range.