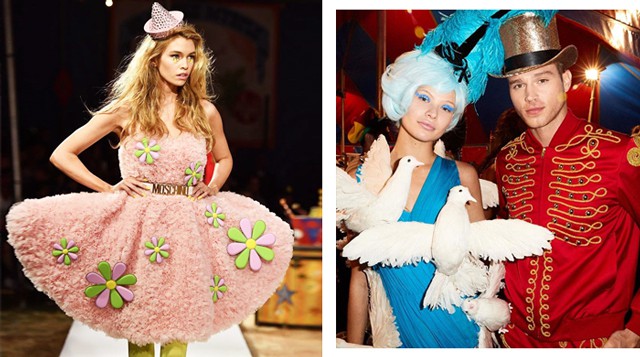 Leave it to Jeremy Scott to create a whole circus in the heart of Los Angeles for his latest show. Take a look here...

Over the past few weeks, a slew of Cruise ’19 collections by luxury labels including Chanel, Gucci, Dior, Prada, Valentino, Alexander Wang, and Louis Vuitton have been revealed in several beautiful locations across the world. And there was another new collection shown overnight.

For the third year in a row, Jeremy Scott brought the fash pack to his hometown of Los Angeles to showcase Moschino‘s co-ed runway show.

Revealing his women’s Resort ’19 and men’s Spring/Summer ’19 collections in what could only be described as the Moschino circus, each look was unveiled on a runway that took place inside a massive tent that was complemented by mini Ferris wheels, painted carts, performers dressed in lion and bear suits and clowns on six-foot stilts and unicycles.

Before the show started, Scott channelled P.T. Barnum and took centre stage announcing, “We have thrills and chills and plenty of frills tonight! You will witness death-defying acts of glamour! You will see beading and embroidery never before attempted in a setting like this! A kaleidoscope of colours will tantalise your eyes….So, without any further ado, let the show begin!”

Now, take a look at how Wes Gordon made his debut at Carolina Herrera.