Here's what you need to know
April 8, 2018
Meeran Mekkaoui 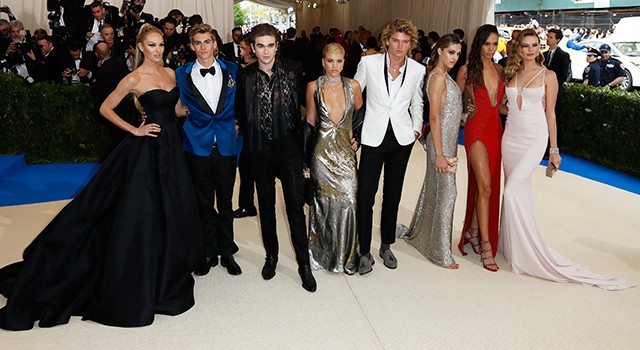 Every year, Anna Wintour hosts an annual fundraising gala that gathers the most prominent figures in the fashion industry. Find out everything you need to know ahead of the event...

The Met Gala is considered to be one of the largest events on the fashion calendar. Falling every year on the first Monday in May, the event brings out some of the most important and stylish names in the fashion and music industries, as well as from Hollywood, to celebrate the museum’s newest exhibition.

Here’s everything you need to know about the upcoming event…

Every year, the Met Gala falls on the first Monday in May and this year’s edition will take place on May 7, 2018. It will take place at the Metropolitan Museum of Art in New York City.

A stylish follow on from last year’s Rei Kawakubo/Comme des Garçons: Art of the In-Between exhibition, this year’s event will centre around religious iconography and its influence in fashion.

Titled Heavenly Bodies: Fashion and the Catholic Imagination, the exhibit will include a series of beautifully designed pieces from coveted brands such as Coco Chanel, John Galliano and Cristóbal Balenciaga, including a loan with 40 pieces from the Vatican.

Curated by British museum curator Andrew Bolton, this year’s edition will be spread across three exhibition spaces within the Met (the Anna Wintour Costume Center, the medieval galleries, and The Cloisters).

Hand-picked by Anna Wintour, this year’s hosting roles will be filled by the ultimate trio: Donatella Versace, Rihanna and Lebanese-native Amal Clooney. They are taking over host duties from Katy Perry, Pharrell Williams and Gisele Bündchen who took the stage at the 2017 Met Gala.

Considered to be the biggest event in the industry, we can expect to see the most prominent figures in Hollywood and fashion A-listers. The invite-only guest list is usually picked by Anna Wintour and last year, the event gathered supermodels including Gigi Hadid, Cara Delevingne, Kendall Jenner, Adriana Lima, Miranda Kerr and Lily Aldridge, actresses Dakota Johnson and Monica Bellucci, and designers Tory Burch, Donatella Versace, Alessandro Michele and Valentino Garavani.

We can expect to see Blake Lively on the red carpet this year as we know the Gossip Girl actress has already chosen her Met Gala dress.

The “no selfie rule” came into effect after the Met Gala famously banned smartphones and social media in 2015 and the rule is still in full effect for this year.

However celebrities love to break the rule with several photos from last year’s event surfacing on the Internet as a slew of celebrities took photos in the bathroom whilst smoking.

This year, smoking will not be tolerated inside the museum and after last year’s incident, the New York City Department of Health offered to provide staff to make sure the rule is enforced, according to WWD.

Make sure to watch this space as we bring you the best of the red carpet looks from the event.

Now, find out which other major event is banning selfies on the red carpet.