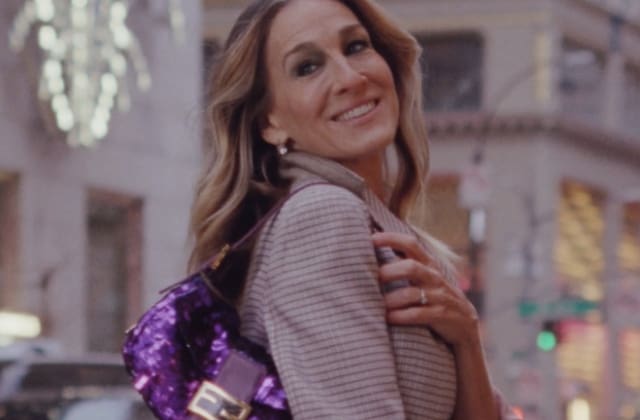 At first we thought it was the official comeback of Sex and the City when Sarah Jessica Parker popped up on our feeds clad in trademark Carrie attire last night. But, her clutching the prominently purple (and sequined) Fendi Baguette bag was the giveaway – even though it so would have been a Carrie choice of bag.

Now even though the fierce foursome aren’t coming back into our lives (yet, *still being hopeful*), SJP did join another group of it-girls for a campaign.

Yep, we’re talking about Fendi’s #BaguetteFriendsForever social media campaign which we previously covered a few weeks ago when it first debuted and now it’s finished off with a lot of sparkle and SJP’s seal of approval.

The Italian fashion house reissued its Baguette bag with a modern twist on its marketing campaign this year, with a four-part series themed around friendship. This last part sees influencers Caro Daur and Natasha Lau plus models Ebonee Davis and Melissa Martinez in New York on a mission to find a vintage Baguette bag. They find that it’s no longer available in the store but see a woman carrying the last one and, yep, you guessed it, it’s SJP.

The girls run out pleading for the bag.

Now, find out which ex-Creative Director might be making a comeback.