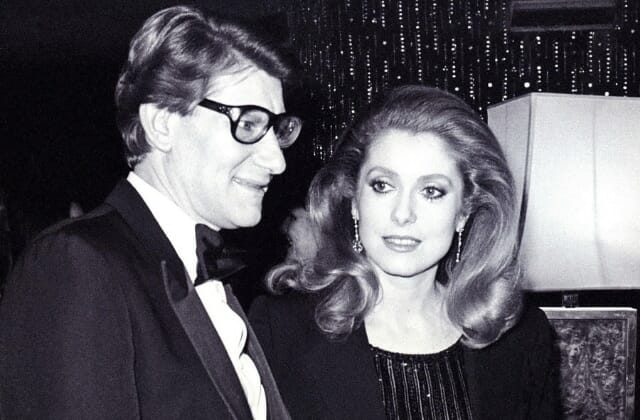 Christie's has just announced a very stylish sale. Here's what you need to know...

Haute Couture Week in Paris is a highlight on the fashion calendar each January, and next year’s event looks set to be a very memorable one. In addition to Olivier Rousteing confirming Balmain will return to the schedule after a 16-year hiatus, Christie’s has just announced a huge sale that will take place during the week.

The famed Parisian auction house will sell almost 300 pieces from Catherine Deneuve‘s Yves Saint Laurent-filled wardrobe, half of which will be available at a physical auction and the other half will be sold online.

Deneuve met Yves Saint Laurent when she was 20 years old in 1965 and she quickly became his muse, being dressed by the designer for 40 years until his passing in 2008. The creations the later designer made for her have lived in her house in Normandy, which she is now selling.

In a release, the actress explained, “In 1965, I was invited to be presented to Queen Elizabeth II and my husband David Bailey, a fashion photographer, suggested that I ask Yves Saint Laurent for an evening dress. I arrived at Rue Spontini with a photo from the Russian Collection from the previous year which he agreed to create for me. A long white crepe dress with a panel of red embroidery was the start of a long professional collaboration and friendship. His consummate gravitas during the fittings together with his shy charm outside the atelier made all the years we shared so enchanting — our silent complicity, our crazy laughter and our melancholy brought us together. I was only 20 years old and I had the privilege of being given access to this world of luxury, to train my eye and my taste by his side. Now, I am leaving my house in Normandy where I kept this wardrobe — not without a certain sadness — these are the creations of such a talented man who only designed clothes to beautify women.”

According to The Guardian, “the collection includes coats, suits, dresses and accessories, many of them one-off pieces. Among the most covetable is a mini dress with a pearl fringe from the 1969 spring/summer collection worn when Deneuve met Alfred Hitchcock.”

Until then, find out which art masterpiece is also up for sale at a Christie’s auction this month.