The new brand that should be on your radar
February 7, 2018
Maddison Glendinning 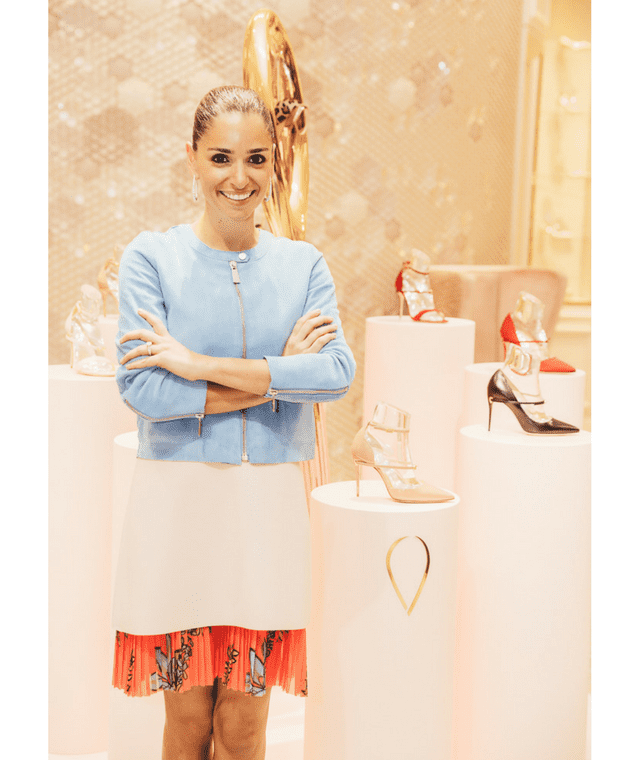 Jennifer Chamandi is in town to launch her eponymous label in the Middle East for the first time. Buro 24/7 Middle East's Managing Editor Maddison Glendinning caught up with her this morning...

It’s rare that you meet a designer, or anyone for that matter, at 8:30am in Dubai Mall for an interview following a late night flight and less than six hours sleep who is totally on form. And yet Jennifer Chamandi is just that, telling me she is so excited to be here that she could barely sleep.

The Lebanese-born, London-based designer is in town to launch her eponymous shoe line in Level Shoes — her first Middle Eastern stockist, with whom she is exclusive.

From the moment we begin talking, it’s clear that Jennifer is filled with passion for what she does. Her strikingly elegant pieces are designed in London and made in Milan where her manufacturer is, and whilst still in its infancy the brand has experienced incredible success since it launched 15 months ago. It has secured positions in some of the world’s top bricks and mortar retail spaces, as well as online, and has been worn by the likes of Amal Clooney and Bella Hadid.

Thanks so much for sitting down with me! Tell me a little about the brand. I know you have a background in finance so how did you come to be a shoe designer?

Shoe design was always my passion and my dream ever since I was a kid. Like any young girl I would look at my mum getting ready and it was the shoes I was drawn to. I used to revise for my exams in her shoes! I felt more confident and more inspired in heels so this dream never really left me.

I’m originally from Lebanon, so my parents being Middle Eastern, encouraged me to get a solid degree in economics and then they would support me in whatever I wanted to do. I think that was the best advice they’ve given me. I went to the London School of Economics and then I went into finance. I have always loved math, so I guess I’ve always had this duality in my head. Everything I learned in finance and economics I implement in my daily work now as a designer but also as a woman who is running her own business.

I think people from the outside think that designing is very glamorous, that it’s all about sketching and launches but there’s an actual business side to it. My years of finance were really crucial in that aspect. 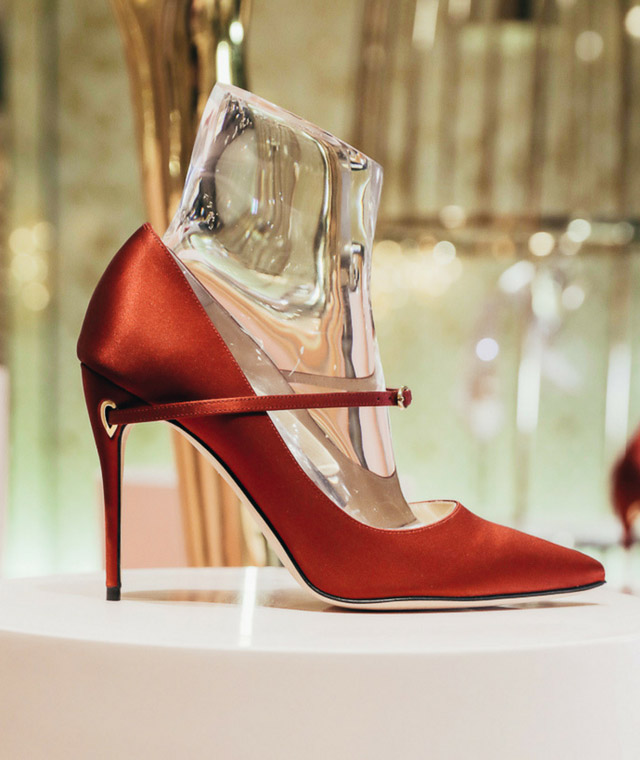 How did you transition from banking to shoe design?

Even when I was in banking, I used to do weekend courses because I was so passionate about it. I’m someone quite technical so I knew that if this is the business I wanted to go into, I needed to have a certain level of knowledge so I went to Central Saint Martins and the London College of Fashion where they have incredible short and weekend courses. Then when I left banking I did a footwear summer school at the London College of Fashion.

So what year was it that you launched the brand?

OK, so it’s still fairly young and yet you’ve had incredible success in that time. You’re stocked at Browns, on Farfetch and now at Level…

Yes! And I launched at Harrods in September which was also incredible. Browns, I am forever grateful to because they were the ones who really supported and launched me from the beginning. I’m also at On Pedder in Hong Kong, Shanghai and Beijing and my next stockist is Net-a-Porter in April. I want to keep the brand niche because everything is pretty much handmade in an artisan atelier in Milan so I want it to grow organically.

Also, when I launched I was seven months pregnant with my twins! I launched the business and 10 days later, they arrived early. So my business and my babies are the same age!

Wow! That’s a busy time. I guess in a way you kind of three children then!

(Laughs) Yes exactly. I am as passionate about my brand as I am about my babies. It’s a blessing being a mum and I get a lot of inspiration from my new role.

Is it safe to say your management skills went into overdrive from that point?

Yes! I think women in general are excellent multi-taskers. I think we have it all in us.

The women in the Gulf are extremely sophisticated and their taste is impeccable.

So you were in born in Lebanon and now you’re in London, tell me a little about that.

Yes I was born and raised in Lebanon and then at 18, I went to London for my studies and I’ve been there almost 14 years. So almost half of my life has been there! I became a British citizen in that time, too. I am very proud of my Lebanese roots but also I’m very proud of my British culture that I’ve amassed. You know, a lot of your personality and the way the grow is instilled in those core years between 18-30 and that is when I was in London. So my brand is British but I am very influenced by my Lebanese roots. My parents are still in Lebanon, I travel to the Middle East a lot and this is how I was introduced to the Middle Eastern women, more than just the Lebanese women, because the women in the Gulf are extremely sophisticated and their taste is impeccable.

It’s interesting that you have Lebanese heritage and yet in a way, after having lived in London for so long, you’re reintroducing yourself to Middle Eastern women in that aspect…

Yes, exactly! There’s quite a few of my childhood friends coming today for the launch and they’ve lived my dream since school! So they know, but for the rest of the women I am kind of reintroducing myself. My heart is very much still in Lebanon but I am very proud of both.

Level is your first Middle Eastern stockist and you’re exclusive to them — why did you decide that now was a good time to launch in the region?

From the beginning I thought it was important because I had to be true to my roots, I wanted a presence in the Middle East — the Middle East is very much a part of me, I speak fluent Arabic, so for me it was a natural decision. Then, Level Shoes was the reference for shoes in the region. It was always on my dream list.

Was launching a bridal collection always the plan?

It was, I just didn’t think it would happen so quickly! But once I saw the bridal suites and the set-up here I knew they were the perfect partner.

How would you describe the Jennifer Chamandi woman?

I’d like to say it’s for every woman. I would love to see my shoes on any woman. When I design, the woman in my head is Amal Clooney. She’s worn my shoes twice, which is incredible. I say her because she’s got that balance, and is the real embodiment, of beauty and brains. My type of women is the modern woman that works and is independent, that travels and is also very feminine. My women is strong, she loves dressing up.

Comfort is a big focus for you in your designs…

I focus a lot on comfort. I think that it helps that I’m a woman designing for women. I’ve worn heels all my life so I know exactly where it hurts, why it hurts, I remember the times I could no longer dance at a party because I was in so much pain or couldn’t go outside for fresh air because I didn’t want to have to take another step. High heels aren’t like a sneaker, but there are ways to make them more comfortable with the silhouette, the padding and the leathers you use… Comfort is a huge feature for me. I want my woman to be comfortable.

And that approach makes so much sense from a design perspective because you want women to be able to, not only wear the shoes all day long, but not just wear them once, take them off and then have them sit in their cupboards…

Exactly! And I love getting emails from clients who tell me they love my shoes because they’re so comfortable — it tells me I’m on the right path. I don’t want to lose that or jeopardise the comfort for aesthetics. Aesthetic is important but wearability is key.

Tell me a little bit about the signature detail on your shoes, the needle thread, which is so beautiful…

Thank you! It’s quite simple and everyone I tell this to says, ‘How did no one ever think of that before?!” Basically, the shoe market is saturated so I knew I needed to have something different that would make them stand out. When I did my course at Saint Martins in 2009, we had drawn a collection and my collection had all these straps and one strap was going around the heel. When it came to actually brainstorming my brand, its DNA and my concept, I thought it’s so easy to have a strap around the heel, anyone can do that, so how can I make it more technical? So I was in this brainstorming moment, and I am French educated and in French stilettos are called talon aiguille which means ‘needle heel’ so I had this ‘aha!’ moment where I thought, I’m going to make my heel like the eye of a needle and the strap will be like the thread going through. Plus, you can remove it so it can be worn with or without. Amal wore them without the strap and I loved it because it showed women the versatility of them.

It’s cool because you can interchange the straps so in Bridal I give a blue bracelet for the something blue so there’s that versatility. I think women nowadays, when we buy something, it’s not just consumerism, we want to buy it and know it can be worn several times and that we can make it our own. 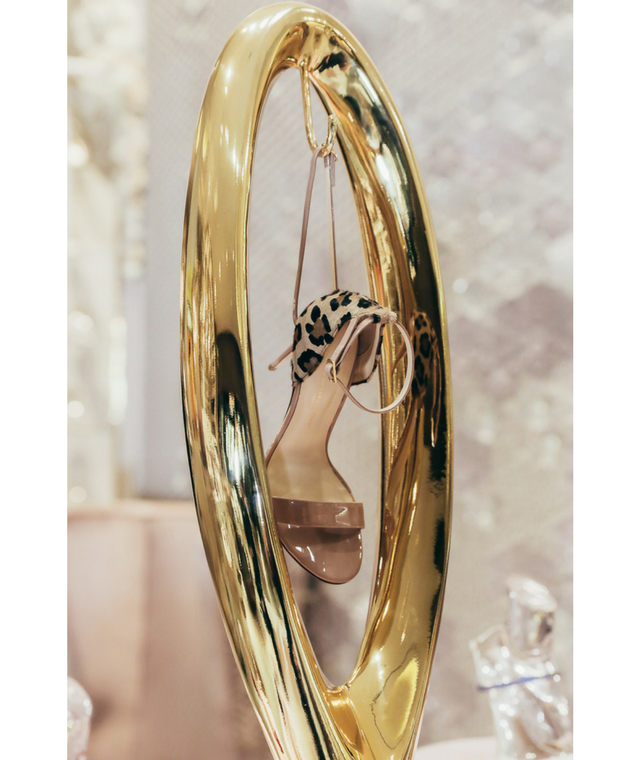 What materials do you use in your designs?

For Level, I did satin because I think its very luxurious and the Middle Eastern women love it. I also use nappa leather, which is very soft and adds to the comfort. I love to use pony leopard because it has a very playful aesthetic and its very soft to touch. For me when I create it’s about all of the senses, not just about how it looks but also how it feels and smells also.

It’s been a great start to 2018 for you and the brand, what can we expect next?

The last year has been really incredible. In 15 moths, the growth has been exponential. This year I’m launching my flats. I didn’t think I would launch them this early on but I recognise the importance of flats. The eye of the needle will be embedded in the shoe, which was much more technical because there’s less surface to work with! I’m launching them with Net-a-Porter in April. I’m also prototyping the ankle boot for autumn/winter.

And finally, which shoe should every woman have in her wardrobe?

The nude patent is an enteral classic, for me I think every woman should have a pair of these in her wardrobe.

Jennifer Chamandi is now available in Level Shoes and online at Levelshoes.com. Now, read our interview with Christian Beck, Aigner’s Creative Director, on why the Middle East is such a key market.