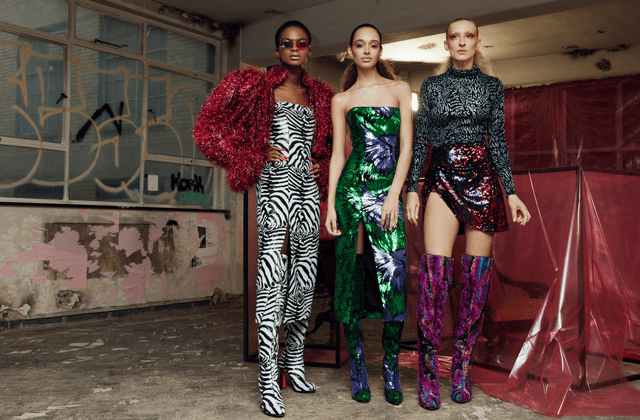 For his most recent show at New York Fashion Week, Michael Halpern teamed up with Christian Louboutin. See what the designer had to say about the shoes below...

One of the most exciting (and talked about) shows from London Fashion Week was undoubtedly Halpern. Designed by Michael Halpern, the brand has enjoyed immense success in a relatively short period of time and has firmly cemented itself as a can’t-miss show on the LFW schedule.

The designer sent models down the runway in an array of sequinned silhouettes, each more eyecatching than the last, and the outfits were completed by a range of equally statement-making footwear courtesy of none other than shoe maestro Christian Louboutin.

This is the second time the pair has worked together and this season, Louboutin customised heels inspired by the Miss Daisy style from his S/S ’18 collection, plastered knee high boots in vivid hues and patterns and adorned ankle boots with a vibrant zebra motif. Each of the styles was finished with the brand’s sculptural Gueridon heel for added impact.

Interestingly, Halpern admitted he has always been afraid of using the colour red, until this season. “I have a tricky relationship with the colour red. I was so scared of it for so long, to use it in my collections. This is the first season we’ve truly used red and it’s been so powerful.”

As for what the Halpern/Louboutin woman wouldn’t leave home without? “Her look, her scent and lipstick.” We can’t argue with that.

Then, discover the pieces…

Although the shoes used in the runway show won’t be available for purchases, some of the styles will be seen in Louboutin’s upcoming F/W ’18 collection. Watch this space.