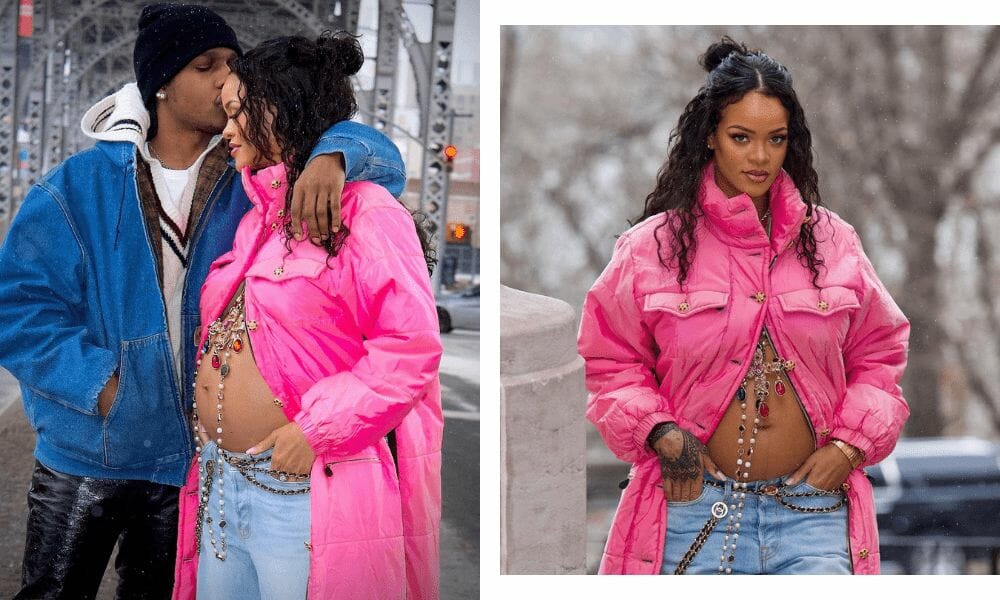 OK so it’s clear that we may not be getting a new Rihanna album anytime soon but at least we know we’ll be seeing a mini Riri in the next few months. The multi-hyphenate and partner A$AP Rocky announced they were expecting their first child with a series of images of the couple in New York – baby bump on full display. Rewriting the rules of celebrity pregnancy reveals, Rihanna did so in the most, well, Rihanna way possible: think gemstones and vintage fashion.

She was photographed in a statement pink puffer trench coat (a vintage Chanel piece from the Maison’s Fall 1996 collection), blue ripped jeans styled with a black jewelled belt by Chanel, and layers of gemstones and pearls (the pearl piece worn is reportedly from Vintage by Misty). The “Diamonds” singer’s announcement definitely took social media by storm and her look alone generated a spike in fashion searches.

According to data by Love the Sales, a fashion e-commerce aggregator, searches for “pink padded coats” have increased by 200 percent, whilst queries for “ripped blue jeans” spiked by 175 percent. The fashion mogul’s choice of gems has increased searches for “pearl necklaces” by 80 percent.

And because A$AP Rocky is a trendsetter on his own too, the expecting dad wore a denim Carhartt Jacket which also made an impact on fashion searches for “Carhartt jackets” with an increase of 75 percent. The American rapper paired it with a white sweater vest and shiny leather black pants with increased by 124 percent (“men’s sweater vests”) and 78 percent (“men’s leather trousers”), respectively.

With parents like Rihanna and A$AP Rocky, this baby is already entertainment-industry royalty.

Also read: Multicoloured bags every man should have on his shoulder.