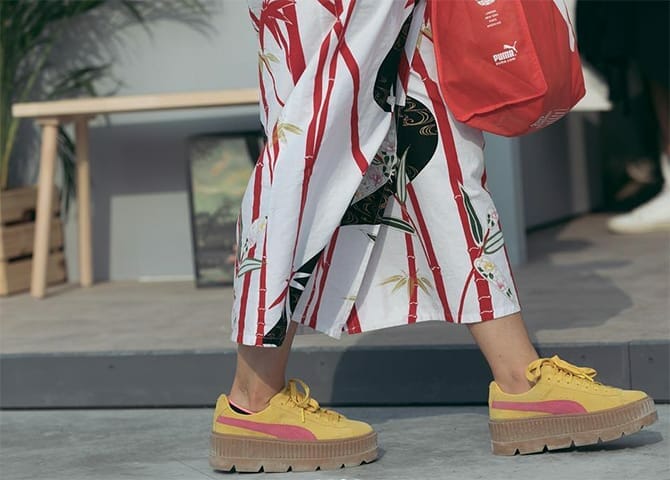 It's that time of the year again where the city's most creative forces come together for Sole DXB. Here's everything you need to know...

It’s the most wonderful time of the year as we’re just hours from welcoming another exciting lineup at Sole DXB.

Known as the city’s premier footwear festival, the three-day event returns for 2018 with a slew of exciting panel discussions, exclusive releases by some of the world’s most luxurious labels, and performances by music industry icons.

Here’s what you can look forward to this year…

On the first day of Sole DXB, award-winning filmmaker, Bobbito García, will be kicking things off by showcasing a captivating film that highlights the bridge between sneakers, basketball and music. Based off his own experiences, you’ll also be able to have a Q&A session with the filmmaker right after the film.

The schedule starts to really kick off on Friday with a plethora of music performances, talks and brand activations on the calendar.

The musical line-up will start with Blood Orange taking to the stage with his alternative R&B sounds, whilst renowned rapper Giggs, Northampton artist Slowthai, South Africa’s rising star Sho Madjozi and emerging artist Masego (who will make his debut performance in the UAE) will join the line-up, too.

But that’s not all.

If you’re on site for the panel discussions, iconic rapper Nas will be leading the speaker line-up with New York battle rapper and pioneer female MC, Roxanne Shante, following suit. Also, Reebok Classic will host an ‘In Focus’ discussion with Kerby Jean-Raymond, the Founder of Pyer Moss (the fashion label that won the CFDA Fashion Fund), and author-journalist Vikki Tobak.

Also, you’ll be able to meet legendary hip-hop photographer Barron Claiborne, as he’s on site for a book signing for Contact High; A Visual History of Hip Hop at the Reebok stand. However, he’s also there for a particularly special occasion as the Reebok stand will be bringing a piece of hip-hop history on the grounds of the d3 event.

The gold crown captured on Biggie Smalls‘ most famed album cover poster (which was shot by Claiborne himself) will be making its debut this year, and you’ll have the chance to actually try it on and snap a selfie.

The last day of the event will see rapper Nas headline the main stage by Reebok Classic, and he will also be joined by America’s R&B duo Lion Babe, Roxanne Shanté and Abra, whilst the Puma space will be presenting emerging artist, Lil Bebe, who will make her debut in the UAE during Sole DXB this year.

If you’ve got some time to check out the talks that afternoon, Highsnobiety will be presenting a short documentary titled Just Dala — Meet Heads of Cape Town and will be hosting a panel discussion with the director, Imraan Christian, afterwards.

Other than the musical performances and panel discussions, there are some achingly cool brand activations worth checking out.

From Adidas Originals, you’ll be able to see some exclusive styles of Yung Series, Never Made, Yeezy and Dragonball Z, whilst luxury labels including Dior Homme and Farfetch will be on site for a series of exclusives and experiences, too. The former is bringing Kim Jones’ first designs for the brand to the space for just two days and offering customisation.

As part of the Puma booth, the sportswear giant will be celebrating women by hosting ‘Female First Sessions’ at their stand to highlight diverse female talent from around the globe. Also, the brand will be dropping the Selena Gomez X Puma Strong Girl collection, as well as their latest sneaker in collaboration with Les Benjamins.

Lastly, make sure you keep an eye out for Reebok Classic (as the brand will be presenting its newest Pyer Moss collection) and Cadillac (as they reveal an all-new vehicle for the first time in the Middle East).

Sole DXB will be taking place at Dubai Design District from December 6-8.

Now, take a look at a Firras Alwahabi’s new multi-dimensional space, Facilité, which just opened up in d3.