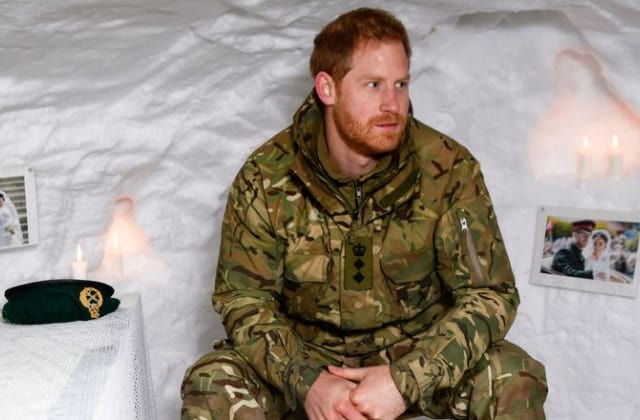 Prince Harry and Meghan Markle spent their first Valentine's Day as a married couple apart. But, while on his royal duties, Prince Harry was in an igloo filled with wedding photos. Aw...

Over the Valentine’s Day weekend, most couples, especially newly-weds, made an ocassion of it. But for Meghan Markle and Prince Harry, royal committments got in the way.

Prince Harry was called out to Norway to meet service people in the Royal Marines involved in Exercise Clockwork, which takes place 200 miles inside the Arctic Circle. Yep, he was really, really far. And Meghan stayed home in the UK.

According to Kensington Palace‘s official Instagram account, “The Duke met specialist aircrew and engineers, finding out more about their experiences of flying with the Royal Marines in the Arctic Circle.” Harry’s visit also served to celebrate the impressive collaborative work taking place over the past 50 years between the two countries.

To make the Prince feel better though (and because it wasn’t just business), he arrived to find an igloo decorated with his royal wedding photos, in honor of Valentine’s Day. We’re sure that gesture made him feel better despite being apart from his beau.

That being said though, the Duke and Duchess of Sussex are going to be spending time together in Morocco at the end of this month to make up for lost time.

Now, see just how stylish Kate Middleton is these days.