Following in the footsteps of some major names...
November 21, 2018
Meeran Mekkaoui 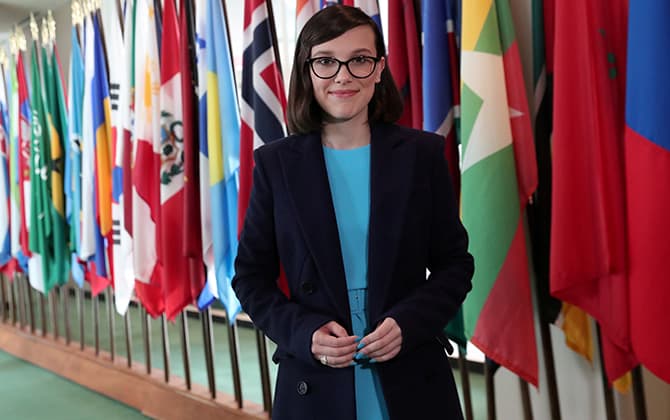 The Stranger Things actress can add another achievement to her list of accolades...

Millie Bobby Brown has been a force to be reckoned with. From slaying the red carpet to becoming one of fashion’s most influential girls and starring in one of the most watched TV shows on Netflix, there’s no slowing down for the 14-year old.

Now, the British beauty can add another role to her list of responsibilities as she’s just been named as the newest Goodwill Ambassador for UNICEF.

Brown’s new appointment makes her the youngest ever ambassador to join the impressive lineup of personalities, including her icon, Audrey Hepburn.

In a press conference held overnight, the star acknowledged the iconic actress and said: “In becoming a UNICEF goodwill ambassador, I share the title with a hero of mine — the late, great Audrey Hepburn, who once said: ‘As you grow older you will discover that you have two hands, one for helping others and one for helping yourself.'”

The Emmy award-winning actress shared her excitement on Instagram with a caption that read: “A dream come true! It’s a huge honour to become UNICEF’s newest and youngest ever Goodwill Ambassador to help defend children’s rights across the world. I can’t wait to get started!”

Now, find out who the top 10 most influential celebrities of 2018 are.