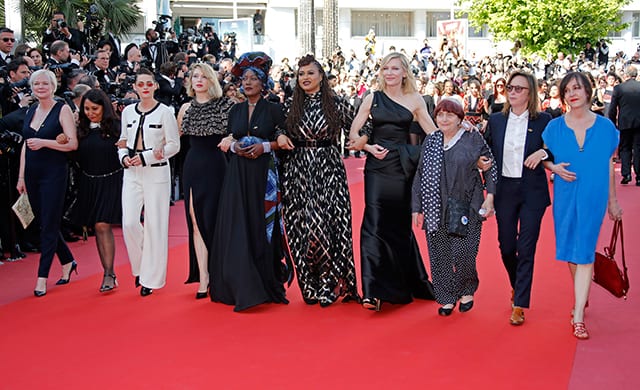 In the midst of this year's Cannes Film Festival, a march took place to highlight women empowerment and everything the #MeToo movement stands for...

The 71st edition of the Cannes Film Festival kicked off earlier this week and there’s already been a slew of beautiful ensembles, familiar faces and stunning jewellery pieces on the red carpet.

The festival (which is considered to be one of the largest events in the film industry), continues to garner Hollywood heavyweights including Kristen Stewart, Salma Hayek, Wonder Woman director Patty Jenkins and of course, Cate Blanchett (who was announced as the newest face to join the panel earlier this year), all of whom participated in one of the most iconic moments in the festival’s history overnight.

Blanchett led a silent protest with 82 other women to highlight the lack of female directors recognised at the festival, as well as to identify the difficulties women face in the workplace. The number was symbolic as it represented the 82 women-directed films nominated for the Palme d’Or compeition in the festival’s 71-year history, versus the 1,645 male-directed films.

Female producers and directors marched arm in arm to demand equality and to highlight that this year’s festival only features three films directed by women out of a total of 21.

The women stopped halfway up the steps of the entrance to the Palais des Festivals (the conference centre which hosts the events) for Blanchett and veteran documentary-maker Agnes Varda to read a collective statement.

“Women are not a minority in the world, yet the current state of our industry says otherwise. As women, we all face our own unique challenges, but we stand together on these stairs today as a symbol of our determination and commitment to progress. The stairs of our industry must be accessible to all. Let’s climb,” they said,

After the march, the festival screened Eva Husson’s Girls of the Sun, which tells the story of Kurdish women fighters. Stay tuned to Buro 24/7 Middle East for more news from the Cannes Film Festival.

Also, take a look at who will be receiving the first ever Influencer Award at the CFDA Awards 2018.