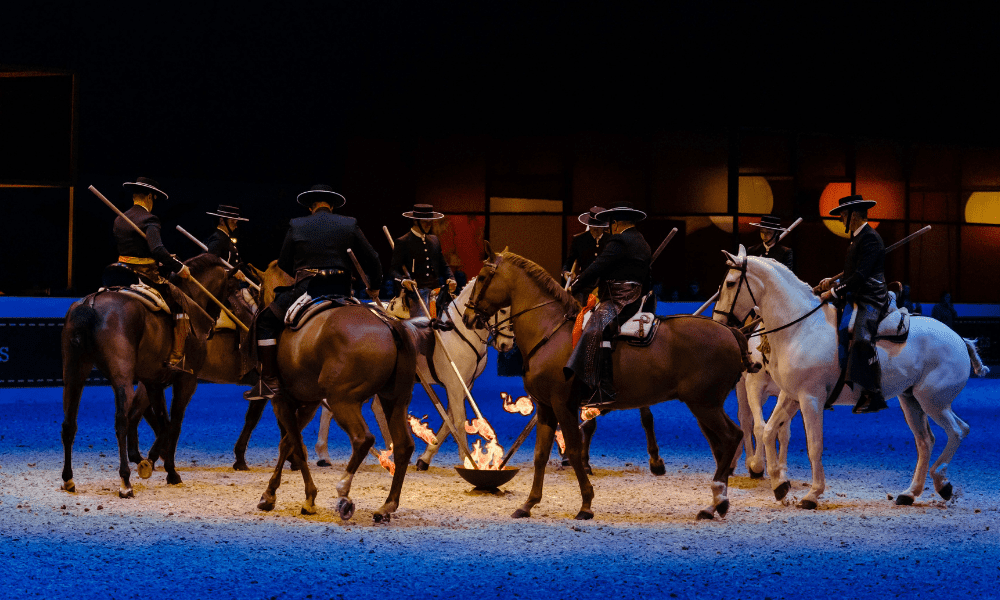 Reserved for the best (and youngest) riders in the world, Saut Hermès returns with a series of unique experiences...

It’s quite rare to have the hopefuls of international equestrianism gather in one location, but, that’s what Saut Hermès is all about. The incredible jumping competition is back on the saddle after a three-year hiatus and for the first time, took place at the Grand Palais Éphémère, retaining all its authenticity in a joyful, sporting atmosphere. Due to the renovation work being carried out at the Grand Palais, this 12th edition took place at the future venue for the Paris Olympics 2024, based at the Champ-de-Mars opposite the Eiffel Tower.

BURO. Middle East was on site to discuss Saut Hermès with the Maison’s Managing Director, Hélène Dubrule. Together we discussed some of the highlights that took place during the March event, the link between Hèrmes and the equestrian world, the new jumping saddle and more.

As the Grand Palais is being renovated for the 2024 Olympics, we were very happy to host this year’s Saut Hermès at the Grand Palais Éphémère – a temporary venue designed by Jean-Michel Wilmotte. For us, it was very important to show the best of horses and their riders within the heart of Paris. Moreover, it’s not far from our original store where the majority of our saddles are still produced. So, we were very happy to have the opportunity to keep doing our show there.

The new location is a novelty in itself. We had to review everything. In fact, there is even a new scenography. There is a new organisation for the paddock which is located at the Champ de Mars and I am pleased to announce that I got word that both the horses and their riders were extremely happy to stay there.

Moreover, the new scenography dabbles with various lights, transparency and colours, all invented by one of our (internal) architects here in Hermès. This year, there’s also a new artistic performance by Alma Vaquera – Denis Marquès in theme with the Andalusian tradition.

There is, as usual, a library and the demonstration of our savoir-faire. We even launched a new saddle, La Selle Rouge which you may have seen this morning. There will also be a virtual digital animation that promises to give a fun and immersive experience where your drawings will be projected in an artistic space via virtual reality by one of our artists.

Moreover, we have been quite generous with the way we have prepared and designed this year’s show. We took the spatial constraints we faced here as an opportunity. For example, we decided to put the family paddock outside creating a very cheerful vibe due to its location at the Champ de Mars. As it is open to the public, everyone can access it and play with the ponies as well as other small animals.

Can you tell us more about the scenography and the program of this year’s Saut Hermès?

Since we have a smaller venue this year, our architect decided to design small theatre spaces, within the scenography. In these mini spaces, visitors could explore many facets of the Maison thanks to our artisans and craftsmen including a boutique and a virtual animation bringing both beauty and radiance into the Grand Palais Éphémère.

As lightness is the Hermès’ theme of 2022, we played with the design of this event in such a manner. For example, how the lighting from the Champs de Mars interacts with the scenography is quite stunning. It comes in ripples through the transparent backgrounds of the scenography.

Moreover, horses, as well as horse riding, are a matter of lightness. It’s a paradox of grace and strength. These animals weigh more than 600 kilos but move with the feet of dancers, thus exuding their elegant balance between grace and strength.

Fifty-five of the world’s best riders will be in Paris to take part in this year’s Saut Hermès. Could you tell us more about the new talents who are part of this year’s competition, as well as explain the CSI 5* ranking system?

This year we have 20 new young talents. They come from ten different nations and, out of these, 60% of them have been ranked by the international federation. Each country and their respective organisers then also have the chance to give opportunities to other professional riders who are not a part of these rankings so that others also have the opportunity to compete at the Saut Hermès.

After a three-year hiatus due to the global pandemic, what will make this event unique and highly anticipated?

It’s a joy and a celebration for us to reopen the Saut Hermès. Every edition is unique, despite its unwavering loyalty to the traditions behind the event. It’s a celebration for all equestrian sports fans but also for professionals as well as people who just love to travel and wander and have the chance to encounter (because it is quite an encounter) this event as well as craftsmen from the Maison.

This new location also makes this year’s event quite different. It promises more intimacy and proximity with the horses, the arena and the competition paddock. Here, I believe you can get closer and connect more deeply with the horses and their riders, compared to any other competition.

Hermès has been linked to the equestrian world since its inception in 1837. Can you elaborate more on this love affair between the House and the horse and how it’s portrayed through this high-level sporting event?

Horses are very symbolic and hold a special place at Hermès, given that they constitute a large part of its DNA.

We tend to say that the horse was the “first client” of the Maison as Thierry Hermès, who was the first family member and founder of Hermès, started by producing harnesses. Back then harnesses tended to be big and ornamental. Thierry Hermès instead choose to develop harnesses that were small and light (but strong and sustainable) so as not to restrain the movement of the horse, giving free rein to its body and its movements. The aesthetic of the function, the craftsmanship, the beauty of the object and the minimalism behind his designs set the tone and direction for all Hermès objects to come.

As horses have such a special place in our hearts and are where savoir-faire and craftsmanship all started at Hermès, it’s important for us to celebrate the horse in the heart of Paris.

Can you tell us more about the new jumping saddle which will be launched at this year’s Saut Hermès? And Selle Rouge ?

The story behind this saddle is very poetic as it’s a continuation of the philosophy of creating the perfect harmony between the rider and the horse, allowing the rider to be totally in contact with the horse.

For this new design, we worked with Jérôme Guéry, our Belgian partner rider and champion from the Tokyo Olympics last year. Between Jérôme and our saddle experts and artisans, they really worked as a dedicated trio trying to make the saddle as light as possible and I was very touched when Jérôme said that he could almost feel the skin of his horse as he touched the saddle.

This new saddle, which takes its inspiration from a dressage saddle, was created for showjumping and working on the flat. And what is incredible is that it is just as beautiful on the inside as it is on the outside, a true signature of the Maison as this is something that you can discover through any Hermès object as every detail counts.

There are so many details to this saddle that make it unique. For example, it has a single seam so as to create the most comfort for the horse. Moreover, it’s very light whilst still being strong and resistant. Furthermore, the name of the saddle is symbolic as it actually comes from our emblematic colour rouge H, creating a new one Rouge Sellier when the saddle is oiled as it turns a light Bordeaux in colour bringing out its warm and intense colour nuances which evolve over time.