The power of nostalgic TV 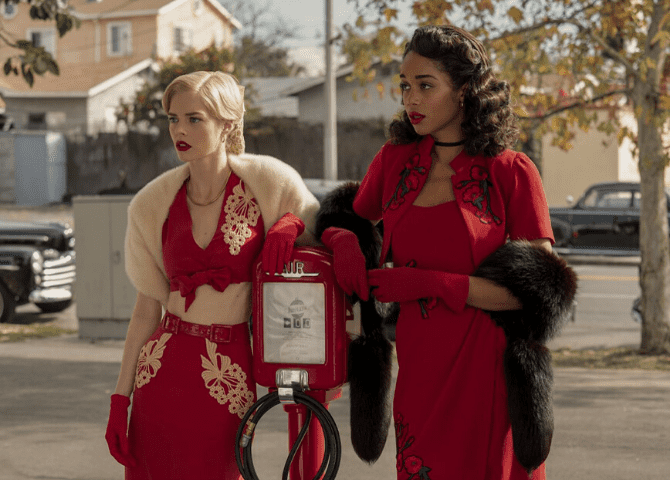 Whether watching shows inspired by Hollywood’s golden age, or re-runs only, indulging in the past can be a self-soothing tool in trying times...

By now, you’re probably well-acquainted with what your friends are missing: hugs, holidays, underwear. Day Whatever in lockdown and many an Instagram grid are but a post away from resembling a ‘Best Of’ photo album. I hope that doesn’t come off as narky, because I too – for better or worse – also find myself drawn to the archives. A result of longing to be with loved ones, 30% more anxiety about sharing anything that bears too much insight into life in isolation and as some proof, to myself and others, that life was fun once upon a time. I was fun(ish). In a world that feels increasingly precarious, looking back offers a sense of much-needed comfort.

Likewise, our televisual consumption is experiencing a heady wave of nostalgia. Which, by definition, is the “sentimental longing or wistful affection for the past, typically for a period or place with happy personal associations.”

There are less obvious nostalgic nuances of late. Like say, Dynasty; a reboot of the classic 1980s soap opera (season three launches on Netflix May 23rd). Or Damien Chazelle’s new musical drama series The Eddy, set in a modern-day Parisian Jazz club, which balances both past and present tense. At its core it’s a love letter to a past art form; if you’ve seen his Oscar-winning film La La Land, this will be of little surprise.

“Jazz is important, has always been important, and will always be important to me,” Chazelle says, in an interview with Vulture. “I grew up playing it and having it in the household. As much as I may want to update things and be contemporary, I can’t pretend I don’t have a deep reverence for the history of that music.”

For more blatant time-travelling, there’s Hollywood, Ryan Murphy’s tribute to old-school Tinseltown. “It takes you back to an era where everything was rather glamorous,” says Sophie Pater, BURO.’s social media manager. “Which is a nice departure from seeing my tracksuit-clad reflection for the umpteenth day in a row. It’s so highly produced, you get totally swept up in it.” An extra side-effect, she says: “The (1940s) fashion inspires me to actually get dressed and the excessive drinking makes me feel less terrible about the increase in my units per week.”

“LOOKING BACK CAN BE A HEALTHY KIND OF ESCAPISM”

Nostalgia is like hindsight’s less judgemental cousin. It’s a softer, less final, more ambivalent way of looking at the past. It’s also, inherently bittersweet. This sugar-laced style of melancholy is captured viscerally on screen in the BBC adaptation of Sally Rooney’s novel Normal People. For those who have not seen it (though please, watch it), the series illuminates memories that perhaps one has sealed off. As the writer and EMPIRE magazine editor Terri White tweeted: “I hated being a teenager, I hated university and yet Normal People has given me a yearning and tenderness for both.”

After some research, there are corners of internet that suggest feeling nostalgic isn’t particularly helpful for growth. Like it’s in some ways unproductive, or regressive. I would argue that it can be helpful. At the heart of these yearnings for the past, is an optimism. A hopefulness. Looking back – in this particular case via the portal of our TV screens – can be a healthy kind of escapism. A soothing balm during times when our present moment feels stagnant and future goals ambiguous.

Watching our favourite TV shows, again, can also do the same job. Canvasing friends to see what they’ve been watching the most recently and 80% of them are enjoying re-runs. “I don’t want to watch anything new,” says Catriona Innes, writer and author of The Matchmaker. “I have been re-watching Nashville. I guess I find it reassuring in some ways – I like that I know what’s coming and yelling at the characters I hate.” Alex McNamee agrees. “Even though I have loads of extra time, I still have a fear of watching a new series,” she says. “So, I’m re-watching Peep Show and Extras, which I used to watch loads when I was at university.”

“NOSTALGIA CAN MAKE US FEEL MORE CONNECTED; TO ERAS WE HAVE NOT LIVED, TO PEOPLE WE HAVE LOVED, TO PARTS OF OURSELVES WE THOUGHT WE HAD FORGOTTEN”

This sense of predictability and familiarity can offer solace in trying times. It can be motivating (I honestly feel I owe it to fictional character Rory Gilmore, an avid reader, for inspiring me to dip into a new book). It can also help you reacquaint yourself with a past you. Like when you hear an old song on the radio or re-read a book and all the memories associated with the time you first encountered it – be it stirrings of teenage love or a moment when you felt secure – naturally rise again.

There’s even scientific evidence to suggest that entering familiar fictional worlds can boost your happiness levels and restore self-control. According to psychologist Dr Jaye Derrick: “[TV] can have unexpected psychological benefits [and] fulfil needs that people are reluctant to fulfil through other means.”

Nostalgia is as much about the future, as it is about the past. It can make us feel more connected; to eras we have not lived, to people we have loved, to parts of ourselves we thought we had forgotten.

Now, discover the docudramas every music lover should watch.