In support of #MeToo and Time’s Up
March 4, 2018
Maddison Glendinning 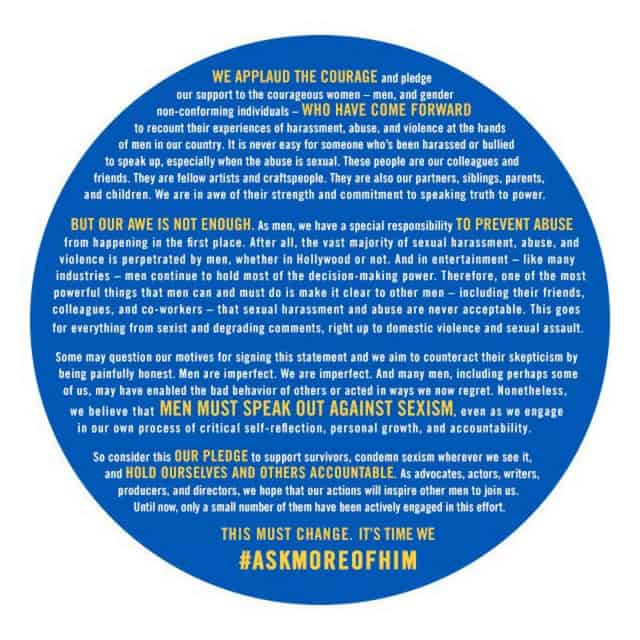 Ahead of this evening’s Oscars ceremony, a bunch of Hollywood’s most powerful men have launched a new initiative. Find out more below...

The 2018 Oscars are taking place overnight and although actresses will not solely wear black on the red carpet for the Time’s Up initiative — Co-Founder Shonda Rhimes said at a press conference across the weekend that the movement was “launched on the red carpet but was never intended to live there” — it will still be a ground to draw attention to worthy causes.

A number of Hollywood’s top leading men have come together this weekend to start a new campaign called #AskMoreOfHim. Organised by the Representation Project, male producers, actors, directors and writers have teamed up with anti-sexual harassment and abuse activists to support the likes of #MeToo and Time’s Up. Stars like David Schwimmer, David Arquette and Justin Baldoni have signed an open letter that encourages men to stand up for survivors of sexual harassment, abuse and misconduct.

Part of the letter reads, “As men, we have a special responsibility to prevent abuse from happening in the first place. After all, the vast majority of sexual harassment, abuse and violence is perpetrated by men, whether in Hollywood or not. And in entertainment – like many industries – men continue to hold most of the decision-making power. Therefore, one of the most powerful things that men can and must do is make it clear to other men that sexual harassment and abuse are never acceptable.”

It continues saying, “As advocates, actors, writers, producers and directors, we hope that our actions will inspire other men to join us. Until now, only a small number of them have been actively engaged in this effort. This must change. It’s time we #AskMoreOfHim.”

The campaign was officially launched across the weekend ahead of tonight’s Academy Awards. Stay tuned to Buro 24/7 Middle East for all of the latest news concerning the ceremony.

Now, see how Meghan Markle recently spoke out in support of the #MeToo and Time’s Up initiative.