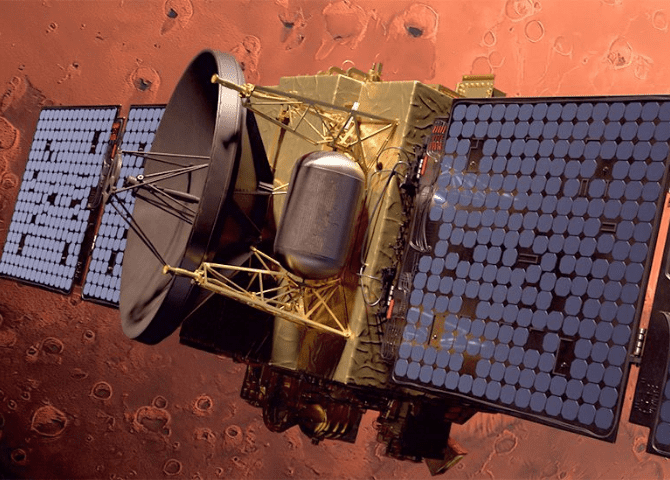 The crucial ‘Mars Orbit Insertion’ stage is taking place tonight. Here's what you need to know...

History beckons for the country today as the UAE is set to finally place its Hope probe around Mars. The Hope Mars Mission officially made its historic launch and took off in July 2020 from Japan, and today, it is about to reach the crucial ‘Mars Orbit Insertion’ (MOI) stage — meaning the probe will orbit the red planet and to do so, must fire its braking engines to enable it to be captured by the planet’s gravity.

The probe has travelled for approximately seven months of 493 million kilometres, and its mission will be completed today. Although it sounds simple, the nail-biting moment is actually called ‘half an hour of terror’ — here’s why. As no scientists have control over the Mars Orbit Insertion, communication remains difficult. Once Hope reaches close to the Martian orbit, a special operation will take place to decrease its speed in order for the planet’s gravity to capture the spacecraft into orbit.

For this to happen, six Delta V thrusters will fire the thrusters for 27 minutes to slow down the speed of the probe from more than 100,000 kilometres per hour down to 18,000kmph, and as any command sent to the spacecraft takes 11 minutes each way (due to the distance between Earth and Mars), there will be absolutely no control over what happens, creating a blackout period with no communication for a short time.

“We’re entering a very critical phase,” said project director, Omran Sharaf. “It’s a phase that basically defines whether we reach Mars, or not; and whether we’ll be able to conduct our science, or not. If we go too slow, we crash on Mars; if we go too fast, we skip Mars,” he told BBC News.

Once MOI is complete, this would make the UAE the fifth country to reach the Martian orbit, after successful missions by the US, Russia, the EU, and India.

MOI will commence at 7.30pm (UAE time) tonight, but the signal confirming the start of the manoeuvre will reach Earth only 11 minutes later. For more information, visit mbrsc.ae.