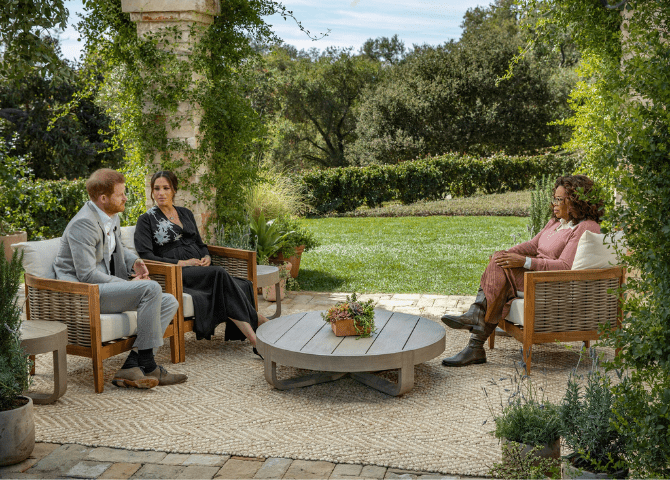 The royal couple sits down for a tell-all with Oprah. When is their interview and what will they talk about? Here's what we know so far...
.stk-post img { max-width: 100%; }

The highly-anticipated broadcast between Oprah Winfrey, Prince Harry and Meghan Markle is set to air in just a few hours and this marks the first major interview after stepping down as senior royals and moving to the US. The two-hour long “Oprah with Meghan and Harry: A Primetime Special” comes shortly after Meghan and Harry announced they’re expecting their second child.

Here’s everything you need to know about the upcoming special…

When and where will the interview play out?

The two-hour long “Oprah with Meghan and Harry: A Primetime Special” will play out on CBS and CBS.com on Sunday, 7 March at 8pm Eastern Time. Viewers in Dubai will be able to watch it at 5am GST Monday.

What can we expect?

It has been revealed that no subjects are off-limits and you can expect to hear Meghan speak about her own experiences of becoming a royal, the rules and restrictions that came with the role, her journey into motherhood and her charity work.

Harry is set to join the women later on in the interview, and the couple will then discuss their decision to step down as senior royals, their move to the US, their future plans and how he feels about leaving his family role.

What do we know already?

CBS has already shared a few teasers and trust us when we say that it will pull you in. In one teaser, Harry talks about his mother, Princess Diana’s death and the difficulties she faced when she left the Royal Family after her divorce from Prince Charles.

“I’m just really relieved and happy to be sitting here talking to you with my wife by my side,” he says. “Because I can’t begin to imagine what it must have been like for her going through this process by herself all those years ago because it’s been unbelievably tough for the two of us. But at least we have each other.”

Another clip shows Meghan telling Oprah how it was “liberating” to make their own choices and to be able to agree to the interview and speak for herself.

Are you going to be tuning in? We are.

Now, discover the five things to know about Clubhouse.