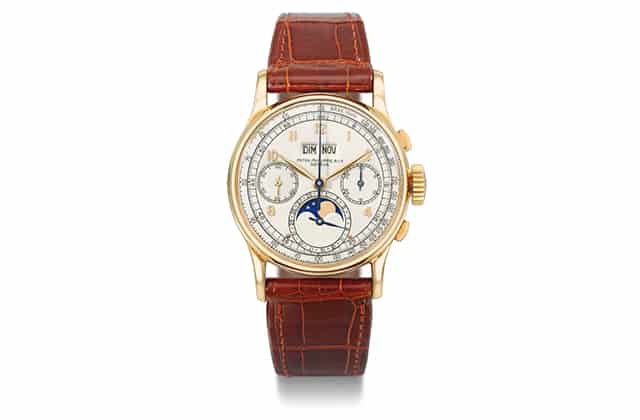 Christie's Dubai Watch Auction scored a new Middle Eastern record and we've got the details on which timepiece to credit...

Over the weekend, Christie’s annual Dubai Watch Auction gathered watch connoisseurs from around the world to auction off exclusive horology pieces (including a specially-commissioned Rolex by Sheikh Mohammed) and it proved to be one of its most exciting editions yet.

Last month, we got a sneak peek at a personalised Patek Philippe Reference 1518 watch, which was originally owned by King Farouk of Egypt, and now that timepiece sold for a whopping Dhs3,350,700.

The watch was sold to an unidentified buyer who made his bid over the phone.

Setting a new record for a watch sold in the Middle East, the Patek Philippe timepiece is the most valuable watch sold on the auction market in the region.

Considered one of only 281 pieces made, the watch was artistically crafted and personalised with its star, half-moon and initial “F” engraved on the case back and is also the first perpetual calendar chronograph wristwatch produced in series by any watch company at the time.

In other timepiece news, find out which luxury label set two new world records at Baselworld 2018.